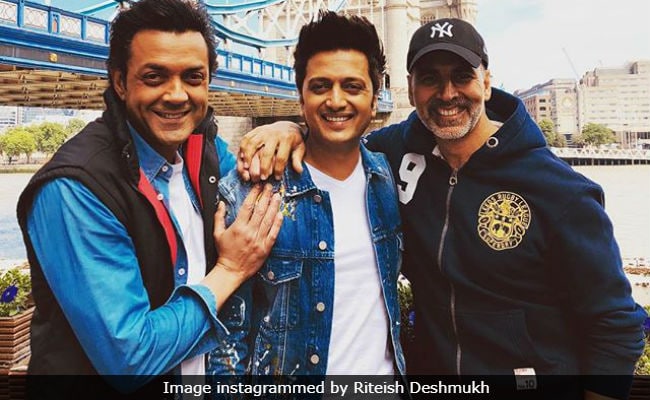 Seems like the cast of Housefull 4 is having a fun time shooting for the film and Riteish's latest Instagram post is proof. On Friday afternoon, Riteish treated his fans with a fun-filled picture, featuring his Housefull 4 co-stars Akshay Kumar and Bobby Deol. In Riteish's "London diaries" post, the trio can be seen flashing bright smiles as they strike a pose in front of the London Bridge. Needless to say, the post has sent the Internet into frenzy and has received over one lakh likes within a few hours. The fourth installment of the Housefull series went on floors on Monday and we got a glimpse from the film's set after Bobby Deol and Akshay Kumar shared pictures from the sets of the film and exchanged ROFL comments on social media.

Housefull 4 remained in the trends list earlier this week, after Bobby Deol shared a million-dollar picture from the sets of the film, along with his co-stars Akshay and Riteish and the film's director Sajid Khan and producer Sajid Nadiadwala. Bobby wrote: "Do I foresee crazy times ahead?? Yes!!! It's time for Housefull 4. Akshay too tweeted the picture along with a hilarious caption. Akshay wrote: "It's time to be a Silver Fox, break Bobby Deol's funny bone and play every game under the sun with my buddy Riteish Deshmukh because the boys are back with four times the fun."

Do I foresee crazy times ahead?? Yes!!! It's time for #Housefull4 with @akshaykumar@Riteishd#SajidNadiadwala@SimplySajidK@WardaNadiadwala@foxstarhindi@NGEMoviespic.twitter.com/EaOrFD0Xzv

Housefull 4 is the fourth installment of the popular comedy series. Much like the first three parts, Housefull 4 also has an ensemble cast. The film also features Kriti Sanon, Pooja Hegde and Kriti Kharbanda in key roles.

Sajid Nadiawala announced the news on Twitter, in October last year. In his post, he revealed that the fourth part will be based on the theme of reincarnation and also mentioned that the film is slated to release in 2019.

The #Housefull gang is back! #SajidNadiadwala's #Housefull4 arrives in #Diwali2019! @SimplySajidK@WardaNadiadwala#Housefull4onDiwali2019pic.twitter.com/HGWlcp6wI0

Both Akshay Kumar and Riteish Deshmukh remain a constant in all three parts of the Housefull series. Akshay Kumar is awaiting the release of Goldwhile Ritiesh will be next seen in the Marathi film Mauli. Apart from Housefull 4, Ritesih also has Total Dhamaal in the pipeline while Akshay will be seen in Rajinikanth's 2.0 releasing in November next year.

Promoted
Listen to the latest songs, only on JioSaavn.com
Comments
Housefull4Akshay KumarRiteish Deshmukh