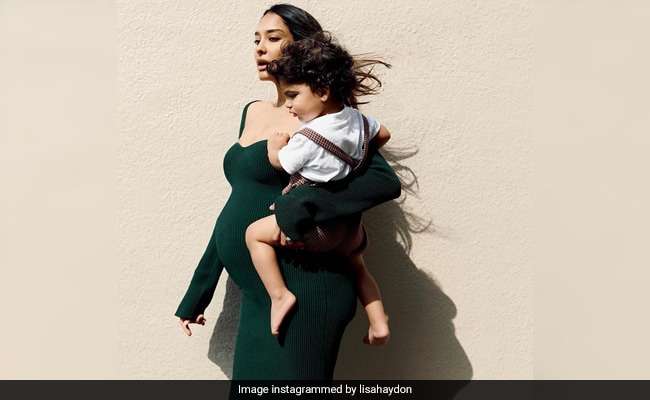 Pregnancy with all its joys is still a daunting task for most women. Suddenly, you find yourself with no clothes that fit well and your body changes in ways that you couldn't have imagined. At such times, it can be frustrating to see our celebrity moms-to-be rocking their fashion looks and high heels at events and gatherings. But model-actress Lisa Haydon, who is pregnant for the third time, recently explained on social media that even celebrities struggled with the same challenges as the rest of the new mothers. In an Instagram post, she wrote, "It's taken three pregnancies to figure out how to dress my bump. And I still find it quite a struggle sometimes. I know most of you think I don't wear anything when I'm pregnant and that is also true. I have subscribed to "if nothing fits don't wear it" in the past."

Referring to the picture she posted, she added, "However, after 4 years of consecutive shape-shifting and this most likely to be my last pregnancy I thought to talk about what's worked for me. This is a dress I wear for most of our evening going out type of occasions. It's super stretchy and one of the few things I bought this pregnancy. I've mainly worn stuff that will work with and without a bump to ensure everything is usable long term."

In the photo, she is seen in a green dress and is carrying her younger son Leo in her arms. He is dressed in a white T-shirt and checkered overalls. Addressing his cameo in the post, the 34-year-old actress said, "Leo just won't let me put him down these days and most every shoot done at home becomes a family affair... Life doesn't stop for the gram."

Recently, the model announced her pregnancy on Instagram with a stunning picture of herself by the beach. Lisa, who has two sons, announced that the third child was a girl.

Take a look at some of her other photos where she is proudly flaunting her baby bump.

She also shared a picture of her two boys playing on the beach and called them "beach babes."

Lisa, who is known for her performances in films such as 'Queen', 'Housefull 3' and 'Ae Dil Hai Mushkil' has been married to businessman Dino Lalvani since 2016.