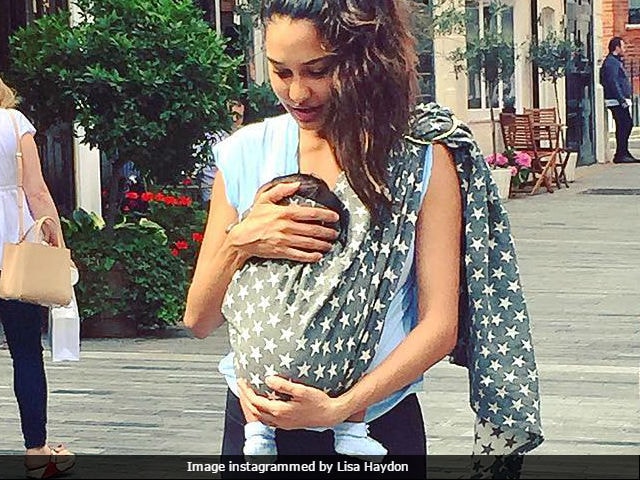 New Delhi: Actress Lisa Haydon shared a new picture of her son Zack Lalvani but The Shaukeens actress is still not willing to show her son's face to the world. Lisa Haydon, 31, and her entrepreneur husband Dino Lalvani, 44, celebrated the arrival of their son Zack in May 2017, a few months after their wedding in November 2016. The first picture of Zack, shared by Lisa Haydon, showed the family of three outside a London hospital from the day when they took Zack home. Zack's subsequent pictures comprised shots of him sleeping, cradled in his mother's arms and the latest one is a close-up of his cute tiny little hands.

Here are some other pictures of Zack Lalvani shared on Instagram by Lisa Haydon.

no greater satisfaction than being your mom my precious. @artipoppe

This bow-tie pic of Zack Lalvani is easily the winner

Apart from Lisa, a fan club shared this picture of her son, which gave a glimpse of his face. The picture went viral when it was first introduced on social media in June.

Promoted
Listen to the latest songs, only on JioSaavn.com
On November 3, Lisa Haydon married Dino Lalvani, son of British entrepreneur Gullu Lalvani. The actress opted for a beachside wedding with just close friends and family members in attendance.

Lisa Haydon debuted in 2010 film Aisha, co-starring Sonam Kapoor and Abhay Deol. She followed it up with films like Rascals, Queen with Kangana Ranaut, The Shaukeens with Akshay Kumar, Santa Banta Pvt Ltd and Housefull 3. Lisa was last seen in the Karan Johar-directed Ae Dil Hai Mushkil with Ranbir Kapoor and Anushka Sharma.