Lisa Haydon Has The Best Caption For Pic With Son

"No greater satisfaction than being your mom my precious," Lisa Instagrammed 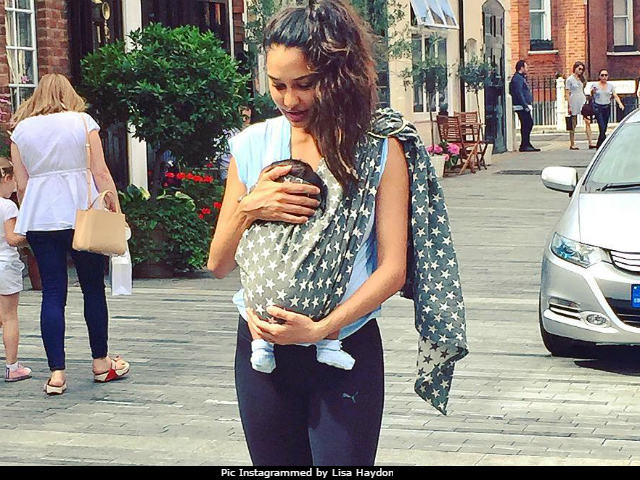 New Delhi: Actress Lisa Haydon and her husband Dino Lalvani welcomed their first baby - a son they have named Zack - in May. Zack was born on May 17 but the baby announcement was only made after a few days with a family photograph of sorts. Since then, there is not stopping Lisa Haydon, who has been sharing glimpses of her new-found parenthood on Instagram along with adorable pictures featuring the baby. It appears that Lisa stepped out with baby Zack over the weekend, which made for an excellent candid mother-son photograph. Lisa couldn't help but share the photo with her social media followers, writing: "No greater satisfaction than being your mom my precious," Lisa Instagrammed. Aww.

no greater satisfaction than being your mom my precious. @artipoppe

Lisa Haydon shared a better glimpse of Zack earlier in May with the baby boy dressed in white shirt and a tiny bow-tie. There are more such cuteness overloaded snippets of her post-motherhood Instagram diary.

Meanwhile, Lisa was quick to get back in shape after her pregnancy and appeared to return to her commitments to the fashion world in no time. She attended the amfAR Gala in Paris looking nothing short of stunning in a scarlet ensemble from the studios of French designer Alexandre Vauthier. She shared a super cute picture with her husband along with a cuter baby caption.

before we run home to #AmfarParis

Promoted
Listen to the latest songs, only on JioSaavn.com
This is how Lisa and Dino broke the baby news - the newly-turned parents and baby Zack photographed outside St Mary's Hospital, where Zack was born.

Lisa Haydon married the 44-year-old business tycoon in a beautiful beach wedding in November. The close-knit ceremony was attended by a handful of relatives and friends of the two. Lisa Haydon dated Dino Lalvani for a year and announced her engagement with an adorable post in September last year. Lisa has last been seen in Karan Johar's Ae Dil Hai Mushkil. She has also featured in films like Rascals, Queen, The Shaukeens, Santa Banta Pvt Ltd and Housefull 3.