Karisma Kapoor posted an old picture of Krishna Raj Kapoor as a tribute for her grandmother, who died on Monday morning in Mumbai 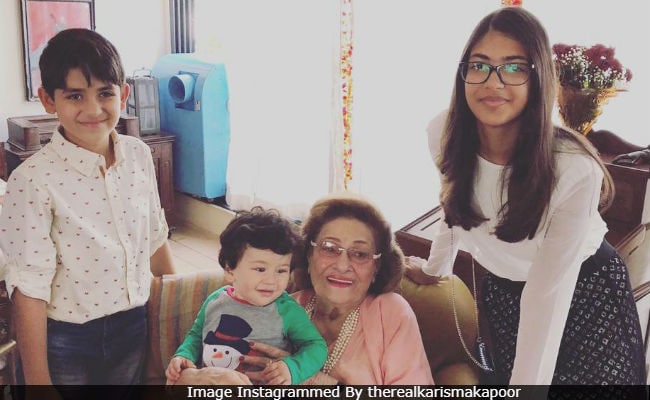 Actress Karisma Kapoor posted an old picture of Krishna Raj Kapoor as a tribute for her grandmother, who died on Monday morning in Mumbai. Krishna Raj Kapoor, wife of Raj Kapoor, died of a cardiac arrest. She was 87. In her Instagram post for Krishna Raj Kapoor, Karisma posted her photo with great grandchildren - Samiera, Kiaan and Taimur. "Remembering big dadi," she wrote, adding hashtags like 'memories' and 'family.' The photo is from last year's Kapoor brunch, hosted every Christmas at late actor Shashi Kapoor's Mumbai home. Samiera, 13, and Kiaan, 8, are Karisma's children while Taimur, 1, is Kareena's son with husband Saif Ali Khan. In the photo posted by Karisma, Taimur is cradled in Krishna Raj Kapoor's arms while Samiera and Kiaan stand on both the sides.

Here's Samiera, Kiaan and Taimur's photo with their 'big dadi.'

Krishna Raj Kapoor's last rites were performed by eldest son Randhir Kapoor, who after her death told news agency PTI, "My mother passed away at about 5 am today due to cardiac arrest... old age was another factor. We are deeply saddened by her demise."

Karisma and Kareena were there by the family's side when several members from the film industry came to pay their last respects to Krishna Raj Kapoor.

She was such a huge influence in my life admired her elegance Wit Generosity Warmth !!! She will always stay in my heart #noonelikeher #besthumanbieng #lovedher#bestfriend

Neetu Kapoor and son Ranbir are reportedly in the US, where Rishi Kapoor is currently undergoing medical treatment.