"She's a darling and I'm really fond of her," Vijay said about Rashmika 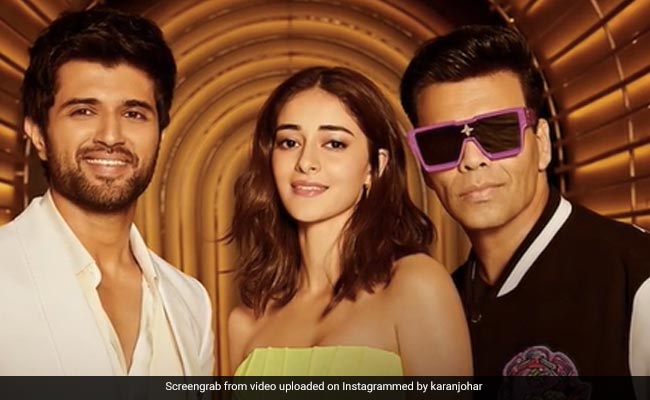 Karan Johar's latest episode of Koffee With Karan 7 dropped today with Liger stars Vijay Deverakonda and Ananya Panday on the couch. While promos of the on-screen couple's shenanigans on the set were doing the rounds on the Internet, the new episode launched a whirlwind of information from the two where Vijay addressed long-standing rumours of dating Geetha Govindam co-star Rashmika Mandanna and Ananya reacting to reports about her break-up with Ishaan Khatter. But first, Karan asked Vijay about his "vibe" with his Liger co-star Ananya and the actor said, "She makes me laugh, she's really cute. I laugh a lot around her. She learns quickly. She did a really good job on Liger."

He then added that Ananya is a "foodie" and not the ideal co-star to have around, especially when one is on a strict diet. "She's a huge foodie. So, if you're on diet and you're playing a role like Liger where you need to be in shape, she's not the ideal co-star to have around. My breakfast was a black coffee and five egg whites. She'll be having a croissant and a pain au chocolat with her coffee," he said. At this, Ananya quickly interjected, "We went for dinner and we ate properly." Karan then asked, "It was a date?" Vijay, recounting the incident, said, "We went on one date." When Ananya asked, "It was a date?" Vijay looked at her: "Kind of. You looked pretty, I dressed up." Shocked by this revelation, KJo then asked Ananya, "You went on a date with Vijay while you were dating Ishaan (Khatter)?" Ananya swiftly replied, "It was a friendly date."

The host then talked about rumours of Vijay's relationship with Rashmika Mandanna and reports a "friendly liason." The two actors worked together in Geetha Govindam (2018) and Dear Comrade (2019).

Vijay said, "We've done two films together in the early years of my career. She's a darling and I'm really fond of her. She's a really good friend. You share so much through films, lots of highs and lows and a bond gets created. Generally, in films, I think you are put in such close proximity very quickly that your bonds develop much quicker. Normally, to sit and look at a girl in the eye and talk to her it would take me a while. But suddenly a director is putting me next to her and asking me to do a montage where I'm touching her cheek and brushing her hair. Suddenly, lots of ice is broken."

The Arjun Reddy star shared why he doesn't reveal his relationship status and added that he doesn't want to break his fans' hearts. "I'm happy in life. I have a really good relationship with my parents. Like someday I'll be married and I'll want to have kids. That day I will say it out. But till then I wouldn't like to hurt anybody who adores me. There are lots of people who love you as an actor, have your poster on the wall and on their phone wallpaper. I don't want to hurt them. They're giving me so much love I don't want to say that I'm with someone," he said.