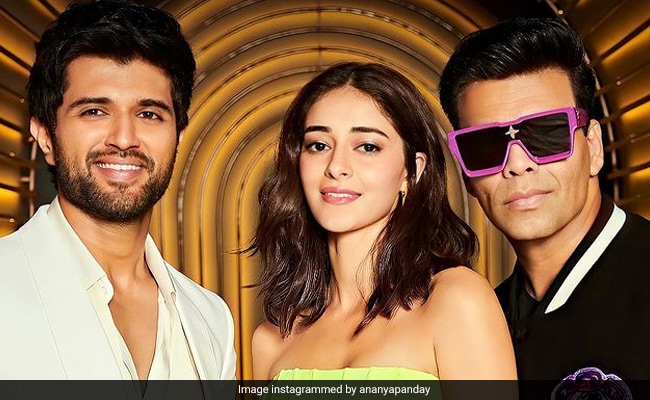 The latest episode of Koffee With Karanwill drop in a few hours and if Bollywood star Ananya Panday's new Instagram post is anything to go by, it is going to be one joyride. Ananya will appear as the guest on the episode with her Liger co-star Vijay Deverakonda. Sharing a bunch of images from the sets of the celebrity talk show, Ananya declared, “The beans have been spilled,” and added a note asking her Instafam to watch the episode on Disney+Hotstar. In one of the images shared, Ananya and Vijay are also seen with filmmaker Karan Johar, who is the host of the popular show.

The promo of the episode that was released earlier this week shows the Liger stars having a blast with  host Karan Johar. The video features the director questioning the stars on dating rumours and work updates.  In the clip, Karan Johar asks Vijay, “Do you like cheese?” To this, the Arjun Reddy star says, “I am scared about where this is leading.” If you are wondering why they are discussing cheese, that is because previously on the show actors Sara Ali Khan and Janhvi Kapoor gushed about Vijay and ended up referring to him as “cheese”.

Karan Johar followed this up with a question to Ananya Panday as well, asking her what is brewing between actor Aditya Roy Kapur and her.

Karan Johar followed the promo video with another fun video of the trio. The clip begins with Vijay Deverakonda and Ananya holding hands. Vijay then speaks to Ananya in Telugu, “Ananya, nuvvu chala muddhu pillavi kani, urke itla na midha line eyaku! Vaddhu!” On hearing this, Ananya says, "That's so sexy, say it again!". However, Karan Johar intervenes to translate what Vijay said: "Uhh, he just said you're cute but stop hitting on him!"

Sharing the hilarious video, Karan Johar captioned it as: "tis the season of cheese".

Koffee With Karan 7 is streaming on Disney + Hotstar. Liger, meanwhile, will be released in theatres on August 25, 2022.