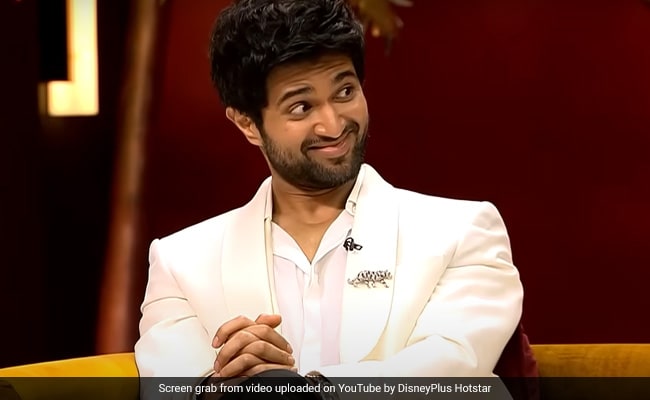 Vijay Deverakonda in a still from the promo. (courtesy: YouTube)

The upcoming episode of Koffee With Karan 7 looks super promising. Expect a cheesy platter of gossip (IYKYK) and some direct questions. For instance, "What's brewing between you and Aditya Roy Kapur?" Karan Johar asked Ananya Panday. The answer is awaited though. Not to mention, when Karan Johar asked Liger star Vijay Deverakonda when did he last have sex, to which the star replied with two words: "Abort, abort." Told you, too many direct questions in store. Anyway, Vijay Deverakonda's Liger co-star Ananya Panday said, "Can I guess? Today morning." Karan Johar, giving Ananya a grammar check, added, "It's this morning."

About the cheese reference, KJo asked Vijay if he likes "cheese,' cryptically referring to a previous episode where Janhvi Kapoor and Sara Ali Khan both confessed (well, almost) to having a crush on Vijay and went on to refer to him as "cheese" on the episode. Vijay's reply was this: "I am scared about where this is leading."

Sharing the promo of the upcoming episode, the show's host Karan Johar wrote: "Serious question - do you like cheese ? Then you'll love Episode 4 of Hotstar Specials Koffee With Karan S7, streams from this Thursday only on Disney+ Hotstar."