Koffee With Karan 7: Sara Ali Khan And Janhvi Kapoor's Very "Cheesy" Episode With A Side Of Vijay Deverakonda

Koffee With Karan 7: Sara Ali Khan and Janhvi Kapoor were at their unfiltered best 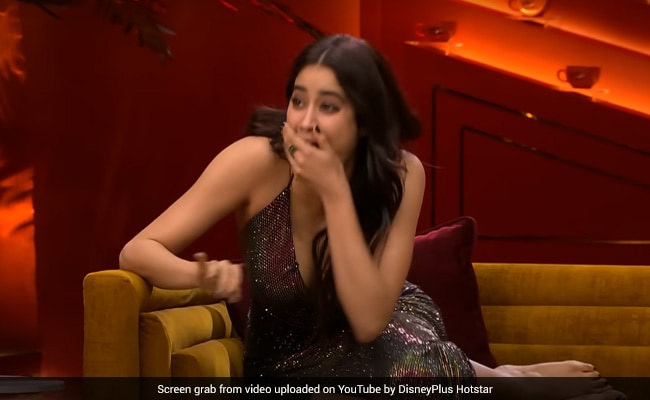 Janhvi Kapoor in a still from the show. (courtesy: YouTube)

Tonight's episode of Koffee With Karan 7 was a platter full of spilled beans by Sara Ali Khan and Janhvi Kapoor with a drizzle of cheese. What went into the making of his trending recipe, you ask? Well, there were a lot of ingredients so we will break it out for you. It all began when the show's host Karan Johar asked Sara to "name of a boy you feel like you want to date today." Sara, who was hesitant at first, said "Vijay Deverakonda" and Janhvi Kapoor's expression was too good to miss. BTW, during Koffee With Karan 6, Janhvi Kapoor had confessed that she had a crush on Vijay Deverakonda. Sara then asked Janhvi if she liked Vijay. After a long drill of questions, Janhvi finally said that Sara can "have the cheese."

When Karan Johar joked, "Why are you guys passing Vijay Deverakonda like a slice of cheese," Sara Ali Khan replied, "We can't be after the same slice of cheese like you said and let me tell everyone that she is now giving it to me."

Karan Johar even asked Sara Ali Khan to be careful about what she manifests for, given the history of the show. In one of the seasons, Alia Bhatt confessed that she wants to marry Ranbir Kapoor. This was when they were not even dating. Also, in the last season, Katrina Kaif stated that she and Vicky Kaushal "would look good together" and later got married. To this, Sara replied, "I don't want to date him. Saying so here was a mistake." She joked that, in that case she would like manifest working with Karan Johar and Sanjay Leela Bhansali. "Rishtas can come later," said Sara Ali Khan.

The "cheese" reference became a recurring phenomenon, especially in the Rapid Fire segment. During the segment, KJo asked Janhvi Kapoor, who would she like to set up Sara Ali Khan with, Janhvi Kapoor said "Cheese. She likes cheese platter." She then said, Vijay Deverakonda or Ranveer Singh." When Sara Ali Khan was asked about listing the actors in love, lust and like categories, she said, "I am on a keto diet, looking for cheese" and then took Vijay Deverakonda's name.

During the round, Janhvi Kapoor was also asked, "Do you keep a tab on the social media accounts of your contemporaries?" Janhvi's reply: "I did and at one point I was very intrigued by how Rashmika (Mandanna)'s Instagram was growing." Sara Ali Khan interrupted saying, "How cheesy." Vijay Deverakonda and Rashmika, co-stars of Geeta Govindam and Dear Comrade, were rumoured to be dating for the longest time.

At the beginning of the show, Karan Johar asked the actresses about the things that they had in common and joked about how they both dated "two brothers" (without naming them). "I am tracking back to before the pandemic. I don't know the level of your friendship today, but I don't remember there being any. I remember that you both have dated siblings before," said Karan Johar. He added, "I mean it was the past. You both dated two brothers. And the commonality between the three of us is that they both used to live in my building."

For those who didn't know, back in 2018, when Sara Ali Khan made her debut on the show, she was asked the same question and she trended big time after the former said on the celebrity talk show that she "wants to date" Kartik Aaryan. Sara Ali Khan and Kartik Aaryan, who co-starred in Imtiaz Ali's 2020 film Love Aaj Kal reportedly dated for a while.

Kapil Sharma Knows What Makes A Picture Perfect: "A Smile"