Koffee With Karan 7: Karan Johar Has Been "Trolled, Abused" For Nepotism And Now...

Koffee With Karan 7: "The only topic that has not left me is nepotism. It started on this sofa and never left me," said Karan Johar 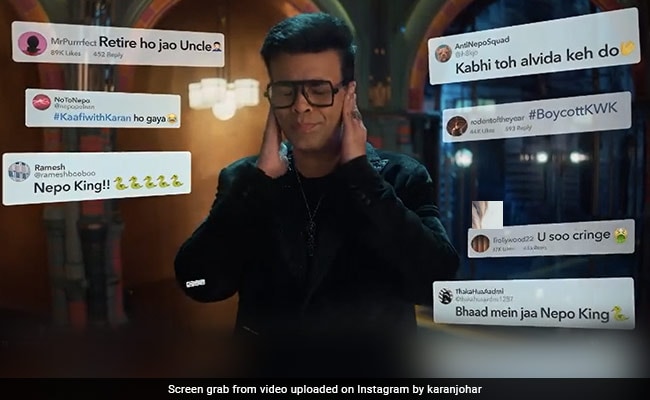 Koffee With Karan 7 trailer: KJo in a still. (courtesy: karanjohar)

Karan Johar spoke candidly to NDTV about various Koffee With Karan-related topics ahead of the seventh season of the chat show; among these was nepotism, first invoked on Season 5. The charge of nepotism - favouring family or friends - has dogged Karan Johar ever since. Now, having been "trolled" and "abused" for casting star kids in his films, Karan Johar says he's developed a thick skin. "The only topic that has not left me is nepotism. It started on this sofa and never left me. It never left the industry, it never left social media. I am still cursed for it, still trolled for it but now I'm not bothered," he told NDTV.

The backstory to the nepotism debate is somewhat ugly. Actress Kangana Ranaut accused Karan Johar of being the "flag-bearer of nepotism" in Bollywood on Season 5 of Koffee With Karan. Soon after, KJo, Saif Ali Khan and Varun Dhawan chanted "Nepotism rocks" at the IIFA Awards, to widespread public censure. All three men are second-generation members of the film fraternity - KJo is the son of late producer Yash Johar, Saif of actress Sharmila Tagore, and Varun's father is filmmaker David Dhawan.

Speaking to NDTV exclusively after the IIFA controversy snowballed, Karan Johar said, "Of course I don't believe that 'nepotism rocks'. Of course, I believe that only talent rocks. If anything that rocks, it's your talent, hard work and conviction. It's the energy you bring to your job. What we said was meant to be a joke, which I think has been misplaced, misunderstood and I think it went wrong. I regret it."

Meantime, Koffee With Karan 7 will see a Khan-shaped hole on the famous couch; neither will Ranbir Kapoor be competing for the coveted hamper. "The three Khans are not coming on this season, I don't have the power to pull them. I can get them for a party but not on my show. I can't manage two also out of the three Khans. Ranbir told me 'I am not coming'. He said 'I will say something and I may be in some trouble so I don't want to come,'" Karan Johar told NDTV.

Koffee With Karan premieres on July 7 on Disney+ Hotstar. The first guests will be Alia Bhatt and Ranveer Singh.