On Koffee With Karan, Tiger Shroff hinted that Tara Sutaria may be dating Sidharth Malhotra. Tara was taken aback 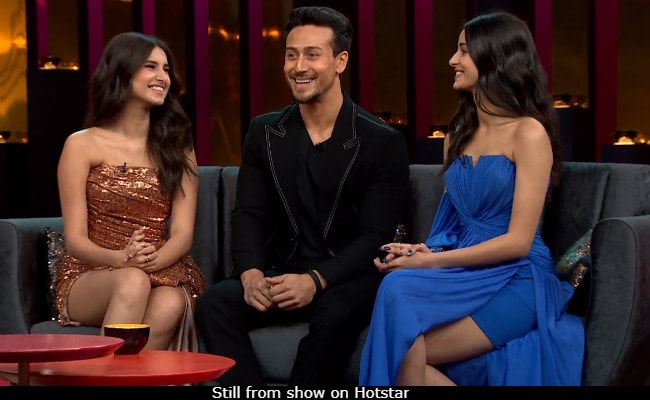 Inside Koffee With Karan (courtesy Hotstar)

Did you know that Tara Sutaria and Sidharth Malhotra are neighbours? Well, after last night's episode of Koffee With Karan 6, looks like there's more to that. Karan Johar had the Student Of The Year 2 co-stars - Tiger Shroff, Ananya Panday and Tara Sutaria - on the koffee couch, when the Baaghi actor dropped a not-so-subtle hint that there may be some truth to the rumours about Tara dating Sidharth Malhotra. During the Rapid Fire round, Tiger was asked to mention "what the following actors have that you wish you had" and he took major inspiration from former Student Of The Year Varun Dhawan and answered "like him."

After naming Alia Bhatt (Ranbir Kapoor's rumoured girlfriend), Deepika Padukone (Ranveer Singh's wife), Natasha Dalal (Varun Dhawan's girlfriend), Tiger was asked about what is it that he wants that Sidharth Malhotra has when he looked at Tara Sutaria and started smiling. "Why are you looking at me?" Tara exclaimed when Tiger replied: "Really?" Meanwhile, Karan Johar, who is known to be well-versed with Bollywood gossip, appeared clueless and asked: "When did that start?"

Firsts are special! Especially this oneCan't believe it's almost time for our Koffee debut @tigerjackieshroff @ananyapanday Thank you for having us!!! @karanjohar #KoffeeWithKaran#SOTY2

Tara Sutaria, who also said that she's currently single, was asked if she ever dated Ishaan Khatter and her reply was: "Ishaan and I are actually childhood friends. I mean we've known each other for a really long time."

This was Tara Sutaria and Ananya Panday's debut on Koffee With Karan ahead of their big Bollywood break with Student Of The Year 2, directed by Punit Malhotra.