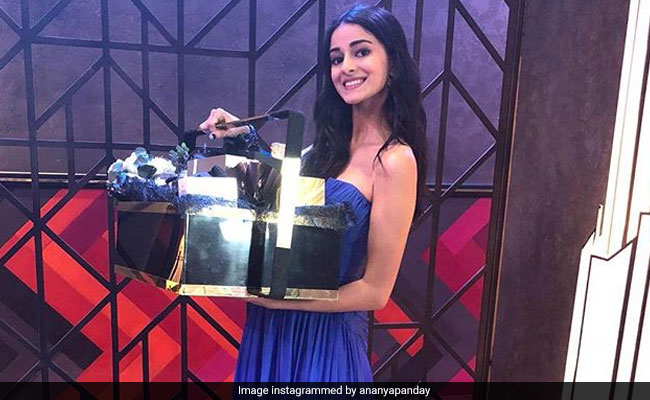 Ananya from the sets of Koffee With Karan (courtesy ananyapanday)

Ananya Panday was on fire during her debut Rapid Fire round on Sunday's episode of Koffee With Karan. Ananya was joined by her Student Of The Year 2 co-stars Tara Sutaria and Tiger Shroff but both of them were beaten in the race as Ananya won the koffee hamper with her sprightly answers. Well, for example, Karan Johar asked both Tara Sutaria and Ananya Panday that who would they like to go on a coffee date with respectively, when Tara said Sidharth Malhotra while Ananya Panday named her Main Meri Patni Aur Woh co-star Kartik Aaryan! "Kartik Aaryan. I think he's damn cute," was Ananya's quick reply.

The show host was quick to remind Ananya that Sara Ali Khan had also said she wanted to go out with Kartik Aaryan and then a lot has happened on that front already! But Ananya said even if not an exclusive date with Kartik Aaryan, she wouldn't mind gate-crashing Sara and Kartik's coffee date: "So, I wanna go on that date when Sara and him are going. That'll be fun!"

Don't have to tell me twice Just one hour to go!!!! 9 pm on @starworldindia #KoffeeWithKaran #SOTY2

One week ago, Kartik Aaryan was on the same couch when he battled questions about if his equation with Ananya Panday is more than just that of co-stars. As per Kriti Sanon, Kartik and Ananya also often go out on coffee dates. Even during the final segment of Koffee With Karan, Kartik Aaryan had called up both Ananya and Sara to help him score points.

Meanwhile, Tara Sutaria named Sidharth Malhotra as her favourite coffee buddy and also said: "I will have coffee with my neighbour Sidharth Malhotra." Tiger Shroff also dropped major hints that Tara may be dating Sidharth.

Pati Patni Aur Woh will mark Ananya Panday's second film in Bollywood. Kartik Aaryan and Ananya Panday co-star with Bhumi Pednekar in the film. Tara, Ananya and Tiger's Student Of The Year 2 releases on May 10.