Koffee With Karan 6: Ananya Panday, Tara Sutaria React After Tiger Shroff Says 'They Are Fake With Each Other'

"One night they were really, really drunk and Ananya did propose Tara" 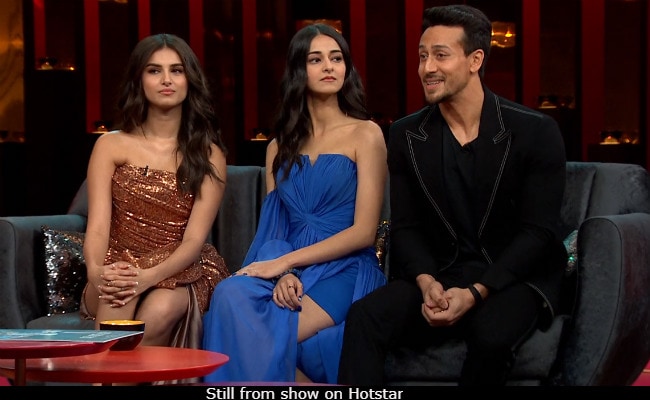 A still from Koffee With Karan (courtesy Hotstar)

Last night's episode of Koffee With Karan is the first time fans were properly introduced to newcomers Ananya Panday and Tara Sutaria, who co-star in Student Of The Year 2 with Tiger Shroff. Karan Johar began by addressing hearsay that Tara appears "intimidating" to her colleagues in Bollywood and that she isn't too pally with her female co-workers. That's when Tiger suggested that Ananya answer this and she said: "I love her" and Tara said the feeling is mutual. However, Ananya and Tara's mutual admiration club doesn't invoke too much confidence when it comes to Tiger Shroff, who said: "They are pretty fake with each other and they are pretty prepped and rehearsed for this for some reason."

When Karan asked Tiger: "You also told me that you find them very fake with each other. Is that true?" his response was: "That's absolutely true. I think my director would agree. I still feel that you guys aren't who you are with each other." While Tiger appeared to be in a semi-jokingly manner, Ananya and Tara lodged strong protests. "Tiger and Punit Malhotra (director of their debut film) want us to fight," said Ananya while Tara added: "Before we even met actually, this has been going on... people kept pitting us against each other."

"She's a bit of a bro, like very chilled out," said Tara and Ananya recounted how Tara used to give her vocabulary lessons.

Tiger was also asked if any of them ever complained about each other to him, when he said Punit will be the best person to answer that. Meanwhile, Karan Johar already had Punit Malhotra's messages pre-recorded for the Student Of The Year 2 trio, which was played out on the show. Here's what Punit said about Tara and Ananya's off-screen rapport: "The ones who actually, famously got along were both the girls. There was this time when they were inseparable. They would eat together, drink together. I went to their room one night and they were both tucked in the same blanket together. I think they were really, really crazy."

Ananya Panday and Tara Sutaria made their Koffee With Karan debut last night. They will foray in Bollywood with Student Of The Year 2, which releases on May 10.