Kartik and Ananya were spotted at several Bollywood parties together, which initiated the link-up reports 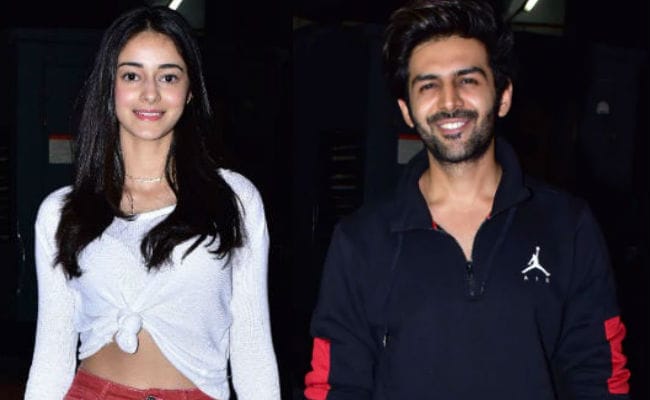 Kartik Aaryan and Ananya Panday at a film screening in Mumbai.

Is Kartik Aaryan dating Ananya Panday? Speaking to Mumbai Mirror, the Sonu Ke Titu Ki Sweety said: "Rumour toh rumour ha na? It is just random talk. I look forward to shooting for the film with Ananya." Kartik and Ananya are co-starring in the remake of Pati Patni Aur Woh along with Bhumi Pednekar. Before the film was announced, Kartik and Ananya were spotted at several Bollywood parties together, which initiated the link-up reports. When asked if he's dating anybody, Kartik said: "I'm in a relationship with my work." Well, between the release of Luka Chuppi and the filming of Pati Patni Aur Woh remake, the actor does have a lot on his plate.

Meanwhile, Pati Patni Aur Woh remake trended for a different reason last week. Actress Taapsee Pannu accused the filmmakers of dropping her from the film without giving her a "proper reason." Speaking about Taapsee's allegations, Kartik said: "To begin with, she never said anything about me in her accusations. Secondly, I wasn't even aware that she was offered the film. I am just a few films old and not in a position to pull off something like that." Taapsee also alleged that director Mudassar Ali was also told to replace Taapsee and "take someone else."

Kartik Aryan was also asked about the sequel of Imtiaz Ali's Love Aaj Kal, in which he is reportedly paired opposite Sara Ali Khan. "I can't say anything right now. You'll have to ask Imtiaz Ali About it," he told Mumbai Mirror.