Ananya painted her stories on the platform purple by writing the KKR war-cry, "Korbo Lorbo Jeetbo Re" followed by a purple heart 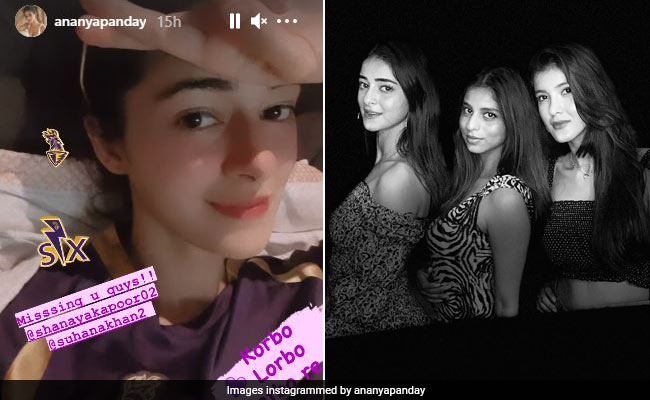 Ananya Panday cheered on the Kolkata Knight Riders (KKR) as the Men in Purple and Gold beat SunRisers Hyderabad by 10 runs in Chennai on Sunday. Ananya sported the KKR jersey and was an adorable cheerleader, as seen in her Instagram stories last night. While watching the Kolkata franchise's opening match in the ongoing Indian Premier League (IPL) 2021, the 22-year-old actor seemed to be missing her besties, Suhana Khan and Shanaya Kapoor. Ananya painted her stories on the platform purple by writing the KKR war-cry, "Korbo Lorbo Jeetbo Re" followed by a purple heart. The Kolkata-based outfit is owned by Suhana's father, actor Shah Rukh Khan. 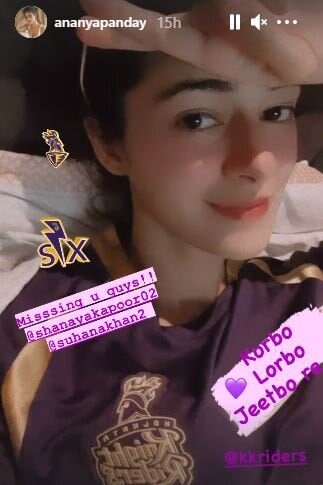 Shanaya shared the stories on her Instagram and added "missing" in the caption, accompanied by multiple purple hearts and pleading face emojis. Ananya's post was also shared by KKR on Instagram. 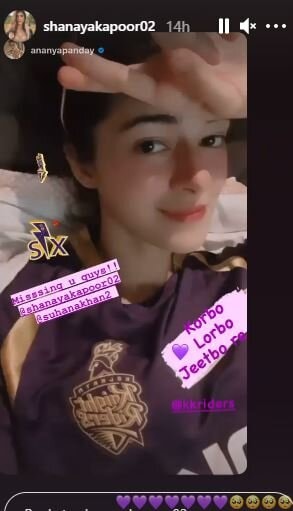 The Eoin Morgan-led side got a huge shoutout from Shah Rukh Khan for the win.

Good to hav our 100th IPL match win. Well done boys...@KKRiders@prasidh43@DineshKarthik@NitishRana_27#Rahul@Russell12A@harbhajan_singh ( good to see u even if briefly )@Sah75official@patcummins30 actually all were so good to watch.

Actor Chunky Panday's daughter Ananya has been friends with Suhana and Shanaya since childhood. Shanaya is the daughter of actor Sanjay Kapoor. The trio is spotted together on several occasions, be it at family gatherings or Bollywood shindigs. They have also tagged together to watch IPL games since they were little.

Ananya often treats her fans to pictures with Suhana and Shanaya. She recently shared a throwback picture, celebrating Holi with them.

Ananya had said in an interview that Suhana and Shanaya stood strong beside her during her darker days. She said, "Suhana, Shanaya and I have grown up together and are practically of the same age. So whenever trolling or bullying happens, we three have each other's back. I am lucky because they are always with me, no matter what."

The girls like to call themselves 'Charlie's Angels' and here are some beautiful portraits.

While there is no official confirmation on Suhana's Bollywood debut, Shanaya has confirmed her first film with Dharma Productions.

Ananya will be seen in the upcoming film Liger alongside Vijay Deverakonda. She has also been cast in a key role in Shakun Batra's next featuring Deepika Padukone and Siddhant Chaturvedi.