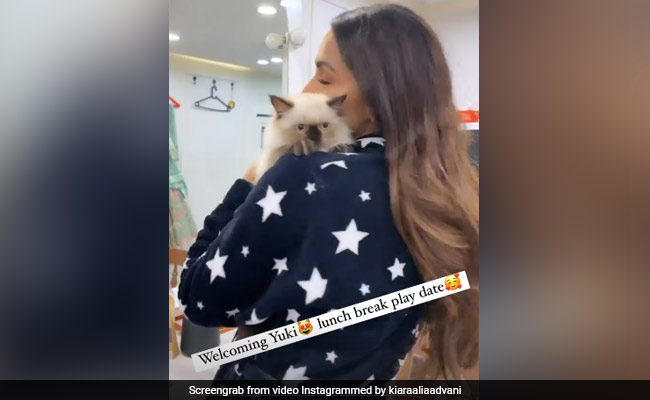 Kiara Advani never misses a chance to entertain her fans with her cuteness on and off-screen. The actress' videos with her co-stars and friends have been popular among the fans. This time, Kiara introduced her Instafam to an adorable fur ball. Sharing on her Instagram profile, Kiara Advani posted a fun reel featuring her lunchtime playdate "Smelly cat". In the video, the 29-year-old actress goofed around with the cat and poses for the video. Kiara compiled the pictures and videos from her play date with the cat and added the track "Smelly Cat" from the TV sitcom F.R.I.E.N.D.S. Kiara also shared a boomerang on her story where she wrote, ''Welcoming Yuki. Lunch break play date''.

The actress' Instafam filled up the comments section of her post with heart emojis and words such as 'Cute', 'Adorable' and 'Both cutiess in one frame'. Take a look at Kiara Advani's aforementioned post here:

Recently, Kiara announced her first multi-lingual film writing on her Instagram, ''Excitement level beyond for my first pan India film. My heart is filled with gratitude to be directed by the one and only Shankar garu and my absolutely wonderful friend and costar Ram Charan, produced by Dil Raju garu. With your blessings, love and good wishes, our film has begun''.

This is what the actress posted on her Instagram:

Kiara Advani began her acting career with the 2014 film Fugly. She rose to fame with 2016's MS Dhoni: The Untold Story, co-starring Disha Patani and late actor Sushant Singh Rajput. Kiara's performance in her latest release Shershaah won her praise from the audiences as well as critics. Kiara has also been a part of films like Indoo Ki Jawani, Laxmii, Good Newwz, Kabir Singh, co-starring Shahid Kapoor and Machine, among others.