Ranveer Singh's hairdo stole the show at the launch event 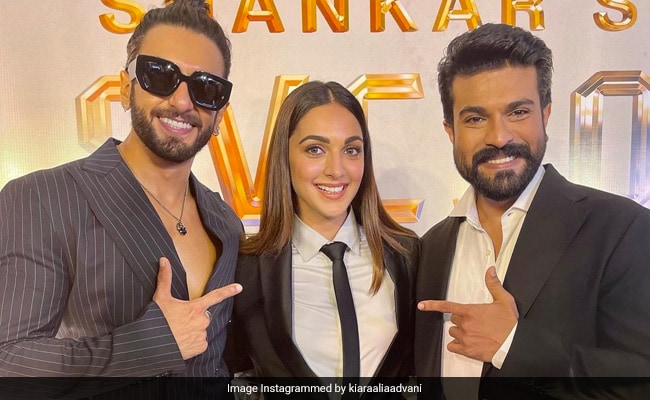 Ram Charan and Kiara Advani's new film had a grand launch in Hyderabad on Wednesday. The film launch event was made special by Ram Charan's father, actor Chiranjeevi, Ranveer Singh and SS Rajamouli. Kiara Advani and Ram Charan's film will be directed by none other than S Shankar and produced by Dil Raju. Pictures from the launch ceremony of the yet-to-be-titled film, which is said to be a political thriller, have taken the Internet by storm and we are not at all surprised. You don't see stars like Chiranjeevi, Ram Charan, Ranveer Singh and Kiara Advani in a single frame that often. Ranveer Singh, who will feature in the Hindi adaptation of Shankar's 2005 Tamil psychological thriller Anniyan, arrived at the event in a pinstriped suit (but without a shirt). His hairdo stole the show at the ceremony. ICYDK, Shankar will direct Ranveer in the Hindi version of Anniyan.

Kiara Advani and Ram Charan can also be seen sporting sharp black suits in the pictures. Their outfits unveiled a glimpse of their respective characters in the film. Kiara and Ram Charan have also co-starred in 2019's Vinaya Vidheya Ramaa.

Sharing the first look poster of the film, featuring herself and Ram Charan, on social media, Kiara Advani wrote: "Excitement level beyond. For my First Pan India film. My heart is filled with gratitude to be directed by the one and only Shankar garu and my absolutely wonderful friend and costar Ram Charan produced by #DilRaju garu. With your blessings, love and good wishes our film has begun."

We just love this picture of Kiara Advani, Ranveer Singh and Ram Charan. "It Suits us," the actress captioned it.

Sharing the first poster of the film, Ram Charan wrote: "To new beginnings!! #RC15 #SVC50 kick starts today. Looking forward to deliver a memorable experience to one and all."

Ram Charan will next be seen in SS Rajamouli's RRR. The cast of RRR is also headlined by Junior NTR. The SS Raajamouli-directed film also stars Ajay Devgn and Alia Bhatt and is slated to arrive in theatres in October this year.