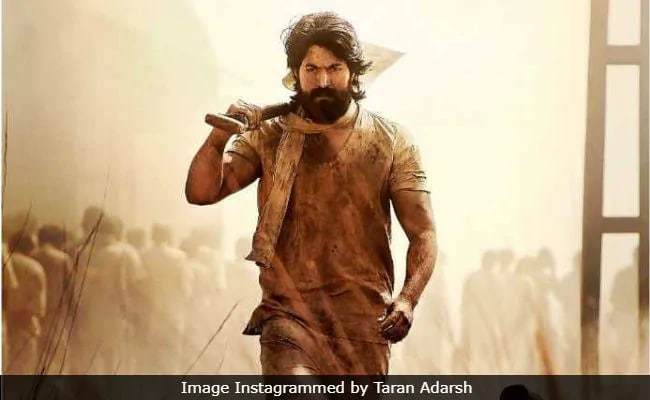 Yash on the poster of KFG. (Courtesy taranadarsh)

Actor Yash believes the phenomenal success of KGF: Chapter 1, which struck gold at the box office and won over audiences across languages, has given the Kannada movie industry a platform to dream big and make films without inhibitions.

The film was dubbed and released in Tamil, Telugu, Hindi and Malayalam. It did exceptionally well in all languages.

"The success of KGF means a lot to the Kannada industry, especially to a lot of our talented technicians who don't get the due they deserve. This success has boosted the morale of Kannada industry. It has justified the talent of Prashant Neel," Yash told IANS in an interview.

He said the success of KGF has made people take Kannada industry "seriously".

"The perception about Kannada industry has changed. People across industries are now taking us seriously. A lot of our talented technicians have been looking for a platform and KGF has provided them that pedestal. This success means a lot to all the untapped talent of our industry," he said.

Yash still sounds grounded, in spite of delivering one of the biggest blockbusters in recent times. He said he doesn't like to dwell upon success or failure for too long.

"If you dwell upon success or failure for too long, you can't move ahead and achieve what you want. I'm glad KGF turned out to be a blockbuster, but honestly the process of making the film excited me more than the result. As an actor, this success would help me take bigger steps," he explained.

It has been over three months since the release of KGF and it is all set for its television premiere on Sony Max on March 9.

Yash is eagerly looking forward to the TV premiere. He says as much as people enjoy watching movies in cinemas and on streaming platforms, the reach of television is still unprecedented.

"Given the population of our country and considering how many people actually show up in cinemas to watch a film, I believe the reach of television is still phenomenal and is a big deal. A lot of people who watch a film in theatre would like to revisit it on TV with their entire family and that's why television premieres are important," he said.

Yash is gearing up to commence shooting for KGF: Chapter 2 from April. He says it will be "bigger" and "better" than the first part.

"When we made KGF: Chapter 1, we had our own inhibitions and restricted ourselves in some way. But with this kind of success in our side, we are going all out to make the second part. We now know people are keenly looking forward to the second part and we can deliver it without any reservations. We have reserved the best for Chapter 2," he added.