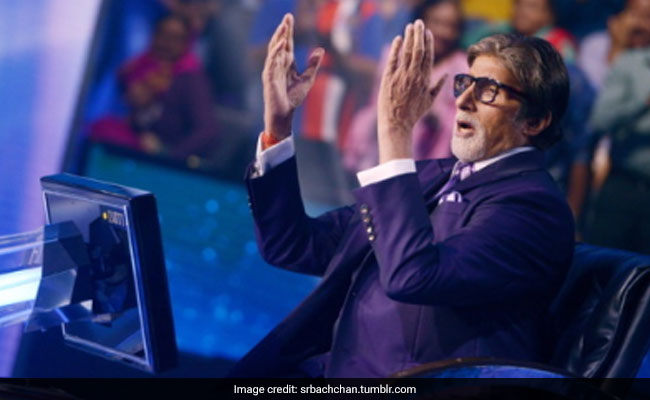 Host Amitabh Bachchan started tonight's episode of the quiz show Kaun Banega Crorepati 11 with last episode's roll-over contestant Akhilesh Kumar Ambesh, a teacher from Uttar Pradesh. Mr Ambesh revealed to Amitabh Bachchan why most of his family members are teachers. He said that his father faced extreme poverty in his childhood and decided to become a teacher to educate others so that they don't face the same fate. Later, Big B also joked about Akhilesh Kumar's beard and said that he bears a striking resemblance to him. Mr Ambesh also showed Amitabh Bachchan and the audience how he teaches kids counting with the help of poems.

Akhilesh Kumar Ambesh's style of selecting right answers left Amitabh Bachchan amazed. However, after exhausting all of his lifelines, Akhilesh picked a wrong answer for the 13th question and instead of Rs 12,50,000, he went home with a prize money of Rs 3,50,000. Taking the game ahead, Amitabh Bachchan asked the remaining contestants the next Fastest Fingers First question. This time, Gautam Kumar Jha from West Bengal made it to the hot seat. Gautam is a Senior Section Engineer in the Indian Railways. Mr Jha will continue the game on Wednesday's episode.

Meanwhile, take a look at the questions asked on tonight's episode of Kaun Banega Crorepati 11.

#In which Indian state of today is the historical and cultural region of Mithila, known as the birthplace of Sita?

#According to folklore, which of his 'Navratna' does Akbar see preparing khichdi in a very odd way?

#How is the Asiatic wild dog or whistling dog better known to us?

#What was the name of the local Jat leader from Baghpat who led many farmers against the British forces during the 1857 revolt and died in battle?