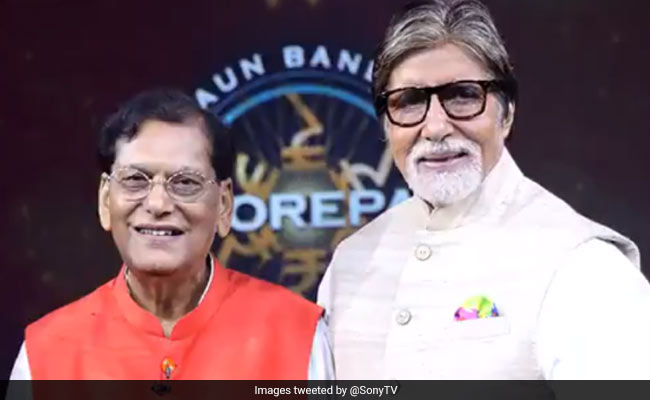 Amitabh Bachchan with Bindeshwar Pathak on the sets of KBC 11. (Image courtesy: SonyTV )

To mark the occasion of Gandhi Jayanti, a special episode of KBC Karamveer was telecasted tonight, wherein sociologist Dr Bindeshwar Pathak from Indore, was invited to play the game along with the show's host Amitabh Bachchan. Mr Pathak, a Padma Bhushan Awardee, who has extensively been working towards ensuring hygienic and safe sanitation, introduced the system of maintenance of public toilets on 'pay and use' basis in the year 1974. As of now, there are about 2 crore people who use the facility that was introduced by him.He went home with a prize of Rs 12,50,000.

During the episode, Dr Bindeshwar Pathak demonstrated a useful acupressure technique that he uses while being stuck in traffic jam. Big B was quite amused by his technique. Journalist Rohit Sadanand was the expert for tonight's episode. Dr Pathak was accompanied by Usha Sharma, the president of Sulabh Sauchalay, who revealed during the episode how his visionary idea helped in removing casteism from their village.

During a segment of the episode, Mr Bachchan revealed that his surname 'Bachchan' does not belong to any religion. He said, "My father was against it. My surname was Srivastava but we never believed in it. I feel proud saying that I'm the first person to hold this family name." The actor added, "When Census employees come to my place, they ask me about my religion and I always answer that I belong to no religion, I'm Indian."

Here are some of the questions that were asked in tonight's episode:

How many wise monkeys are there in a pictorial maxim associated with Mahatma Gandhi?

What does the 3rd R in the three Rs of waste management represent?

In the context of human body, what is "daarh" a type of?

In which language was the novel Chandrakanta originally written?