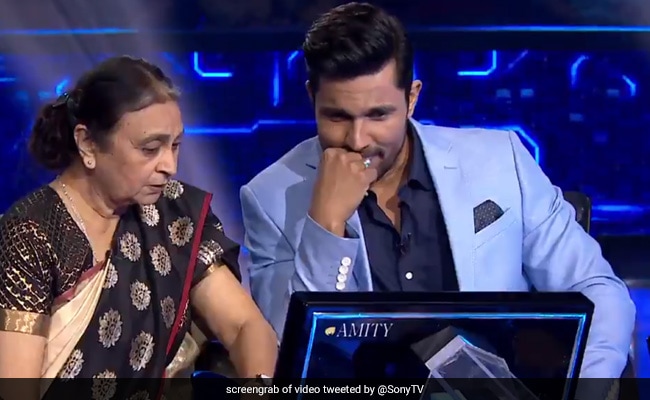 Amla Ruia and Randeep Hooda on the sets of KBC 11. (Image courtesy: SonyTV)

Tonight's episode of the TV quiz game show Kaun Banega Crorepati 11was special for more than just one reason. To begin with, the show's host Amitabh Bachchan hosted Karamveer contestant Amla Ruia. Secondly, Bollywood actor Randeep Hooda also played the game along with Ms Ruia. Thirdly, the episode focused on the issue of water conservation. During a segment of the show, the duo talked about the necessity of water conservation in rural India. Ms Ruia also spoke about why it is essential that we take actions to improving ground water. Randeep Hooda and Amla Ruia won a whopping prize money of Rs 25,00, 000

Mr Bachchan recalled the times when Randeep Hooda worked with his daughter-in-law Aishwarya Rai Bachchan in the film Sarbjit and told the actor: "I'm a fan of your work."

Earlier this month, Randeep Hooda gave his fans a glimpse of the episode by sharing a selfie with Mr Bachchan on his Instagram profile. An excerpt from his post read, "Always an inspiring and humbling experience to meet the one and only Amitabh Bachchan sahib." Take a look at the aforementioned post here:

Always an inspiring and humbling experience to meet the one and only @amitabhbachchan saab .. he's such a huge part of our collective consciousness as a nation.. his performances, his philanthropy, his personality, his untiring dedication to work and of course the sound of his voice are unparalleled.. and then when he says "I'm a fan of your work" you really don't know where to look and what to say.. giddy .. thank you sir for the pat on the back #amitabhbachchan #actor #actorslife #megastar @kaunbanegaacrorepati #karmveer episode airs Friday the 27th of Sept at 9pm

Here are some of the questions that were asked by Mr Bachchan during the episode:

Which of these is a film by Mani Ratnam?

Which of these beverages is the word filter mostly associated with?

Which mass movement in India began with the Dandi March of 1930?

Which of these movie characters did not earn its portrayer a National Film Award for Best Actor?