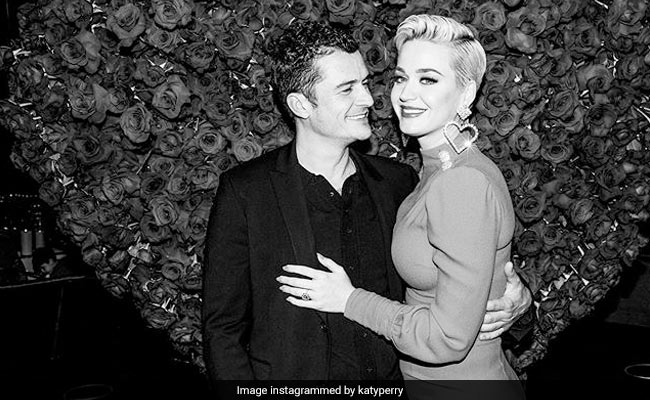 Katy Perry in a still from the video. (Image courtesy: katyperry )

Katy Perry announced her first pregnancy in a new music video on Thursday. The pop singer sent the Internet into a tizzy by revealing her pregnancy with actor fiance Orlando Bloom in the music video for her new single titled Never Worn White. In the short clip, Katy, 35, looks stunning in a dress made from flowers and a white gown and going by the end of the clip, it appears that she is cradling her baby. "Cause I've never worn white. But I want to get it right. Yeah, I really want to try with you," she can be seen singing in one of the verses and it appears that she wrote the heartwarming lyrics for her fiance. Sharing the post, Katy Perry wrote: "Let's just say, it's gonna be a jam packed summer." She later wrote on Twitter: "Omg! So glad I don't have to suck it in anymore" and added: "Or carry around a big purse. Lol."

Let's just say it's gonna be a jam packed summer... #NeverWornWhite is out now

omg so glad I don't have to suck it in anymore

or carry around a big purse lol

In no time, the comments thread of Katy Perry's Instagram post was filled with best wishes and congratulatory messages. While Orlando Bloom dropped a heart emoticon in the comments section, singer Cynthia Nabozny commented: "Let's just say.... I can't wait for this summer!" Fashion designer Jeremy Scott wrote: "My baby's having a baby!"

A screenshot of Orlando and Cynthia's comments on Katy's post.

Katy Perry was previously married to comedian Russell Brand. However, the couple parted ways in 2012. The singer reportedly met The Lord Of The Rings actor, who was married to model Miranda Kerr from 2010 to 2013, in 2016 and started dating him. The couple got engaged on Valentine's Day in 2019. Mr Bloom has a son named Flynn with ex-wife Miranda.

Last year, Katy Perry trended big time on social media after she performed at an event in Mumbai, India. She even partied with a number of Bollywood stars such as Alia Bhatt, Aishwarya Rai Bachchan, Jacqueline Fernandez, Karan Johar, Anushka Sharma and others during her Mumbai visit.

On the work front, Katy Perry is best-known for singing tracks such as Last Friday Night, Supernatural, California Gurls and I Kissed A Girl among many others. Roar and Firework are two of her most popular tracks.