By the end of the game, Katrina emerges a clear winner but Akshay Kumar holds a straight-face when she tells him: "You stop that face." 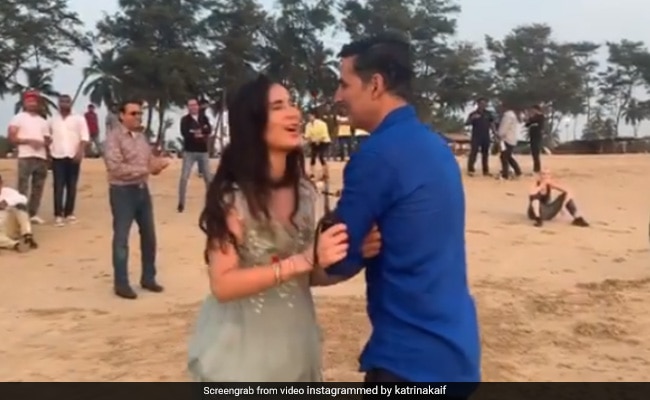 Katrina Kaif in a still from her video (courtesy katrinakaif)

Katrina Kaif, who often shares interesting anecdotes from the sets of new film Sooryavanshi, Instagrammed just a glimpse of her shooting diaries. Looks like a regular day on Sooryavanshi sets usually ends with some fun games. In this case, Dog and the bone. Katrina shared a video of hers playing "Dog and the bone" with a crew member on what appears to be the beach. Akshay Kumar is apparently the team captain, who keeps yelling: "Kat, you have to win, Kat. Otherwise, we will lose!" Katrina had something funny to say about that: "Dog and the bone. End of day games on Sooryavanshi (sets). Akshay Kumar though is a very serious team captain. Please hear his instructions and his disapproval at my failed attempt. Rohit Shetty is looking most amused."

By the end of the game, Katrina emerges a clear winner but Akshay Kumar holds a straight-face when she tells him: "You stop that face."

and the .... end of day games on sooryavanshi......@akshaykumar though is a very serious team captain pl hear his instructions......and his disapproval at my failed attempt @itsrohitshetty is looking most amused

Katrina Kaif's video appears to be from this day, when Akshay Kumar wrote this beautiful note for his co-star: "If I had to describe shooting with Katrina in one picture, this would be it."

#Repost @akshaykumar If I had to describe shooting with @katrinakaif in one picture, this would be it :) #GoodVibesOnly #Sooryavanshi #BTS

Spotted : The newest #SwachhBharat brand ambassador on the sets of #Sooryavanshi @katrinakaif #BTS

Katrina Kaif and Akshay Kumar launched the trailer of Sooryavanshi earlier this week. The Rohit Shetty-directed cop drama also features extended cameos by Ajay Devgn as Singham and Ranveer Singh as Simmba. Sooryavanshi is all set to hit screens on March 27.