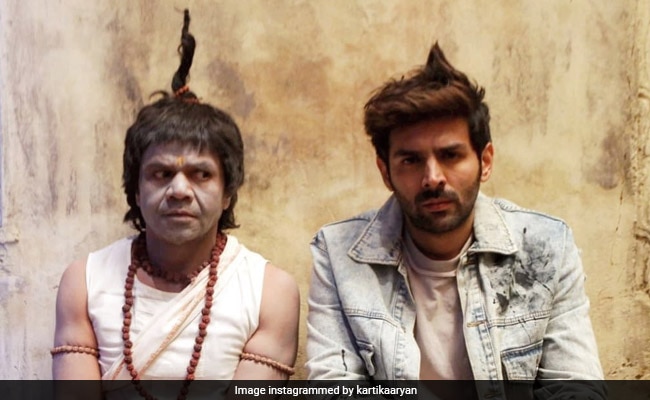 Kartik Aaryan, who is gearing up for his upcoming film Bhool Bhulaiyaa 2, treated his Instafam to a hilarious Holi-special picture on Monday. The photo also features his co-star Rajpal Yadav. In the picture which appears to be from the set of Bhool Bhulaiyaa 2, Kartik can be seen posing with Rajpal. Both the actors are giving their oh-so-funny expressions. If you remember Rajpal's role as Chote Pandit in the 2007 film Bhool Bhulaiyaa, the actor is still in that character. The highlight of his character was the high ponytail which remained straight throughout the movie.

What makes this post even more hilarious is that the Love Aaj Kal actor has also tried the same hairstyle as his co-star Rajpal. Kartik can be seen in a denim jacket and blue jeans, Rajpal, on the other hand, is sporting a white outfit and beads garlands along with the ponytail. Rajpal also has white paint over his body.

Kartik Aaryan had tested positive for coronavirus a week ago. The actor recently shared the news with his fans on Instagram. He wrote, "Positive ho gaya...Dua karo."

In Bhool Bhulaiyaa 2, Kartik Aaryan will share screen space with Kiara Advani. The film also stars Tabu in a pivotal role. Anees Bazmee is directing the movie. It is a sequel to the 2007 film Bhool Bhulaiyaa which featured Akshay Kumar, Vidya Balan and Shiney Ahuja. Speaking of Rajpal Yadav, the actor portrayed the role of a pandit in the original movie. Rajpal will be reprising his role in Bhool Bhulaiyaa 2. The upcoming movie will hit the screens on November 19 this year.

Apart from this film, Kartik Aaryan will also be seen in Dhamaka and Dostaana 2. He was last seen in the Imtiaz Ali's 2020 film Love Aaj Kal opposite Sara Ali Khan.