Karisma Kapoor's Throwback Perfectly Sums Up "Mood During The Past Year" 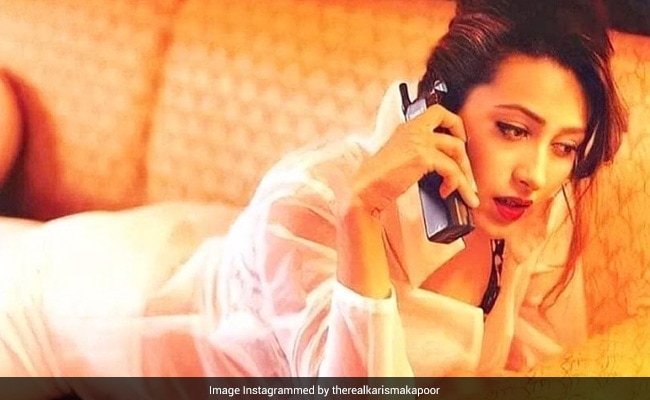 Karisma Kapoor loves her throwback photographs and we are not complaining at all. In the latest Instagram post, the actress takes us back to the 90s. She can be seen lounging on a sofa, chatting away on a phone. With a sheer dress and stunning makeup, Karisma looks every bit the glamorous diva that she is. Karisma made it sassy by adding a bit of humour to the caption, "Mood during the past year #sofaseries #flashbackfriday #blastfromthepast." The picture was a hit on the platform. Riddhima Kapoor Sahni, who is Karisma's cousin and actor Ranbir Kapoor's sister, commented with a heart emoji.

Karisma, who frequently treats us to videos and fun photos of her family and herself, seems to be missing the pre-pandemic world like the rest of us. A few days ago, the actress reposted an image of the Kapoor clan enjoying a vacation.

And when she is not melting our hearts with the lovely family pics, she takes us down memory lane with some amazing throwback moments. Karisma had shared a photo taken on sets of the 1996 film Jeet, where the actress is wearing a yellow chiffon sari. She wrote in the caption, "Chiffon saree in Switzerland. #flashbackfriday. Any guesses which film this pic is from? #guessinggame." Fans, who were quick to with their answers, asked the actress to make a comeback on the big screen. Sunny Deol and Salman Khan were Karisma's co-stars in the film.

Karisma made her OTT debut with Mentalhood, a web series on Zee5. She portrays the role of Meira, a multi-tasking mother. Sanjay Suri, Dino Morea, Sandhya Mridu are part of the star cast.