Hey Karisma Kapoor, The 90s Called. They Want The Chiffon Saree Back

"Any guesses which film this pic is from," read Karisma Kapoor's caption 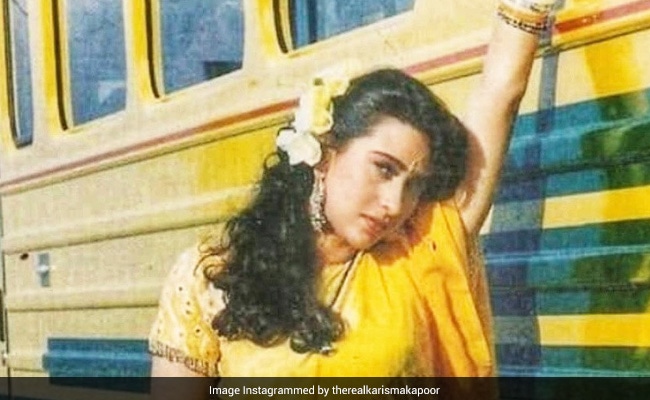 Karisma Kapoor is back with the guessing game. A quick glimpse through her Instagram profile clearly established her love for two things - throwbacks and guessing games. The actress often shares her popular looks from Nineties' films and asks her Instafam to guess the name of her film. On Friday, the actress shared a throwback picture, in which she can be seen dressed in a yellow chiffon saree and the picture happens to be from Switzerland. Well, guessing this one wasn't that easy given Bollywood's obsession with chiffon sarees and Switzerland in the Nineties. While the correct answer is awaited, her fans' popular guess was Jeet.

Sharing the post, Karisma Kapoor wrote in her caption: "Chiffon saree in Switzerland. #flashbackfriday. Any guesses which film this pic is from? #guessinggame."

Like we said earlier, the actress loves to share throwback shots from her films. Here are some more posts from Karisma Kapoor's guessing game. Check them out, you can thank us later.

In terms of films, Karisma Kapoor  was last seen in the 2012 film Dangerous Ishhq, after which she featured in special roles in films such as Bombay Talkies and Zero. Karisma Kapoor's last project was ALTBalaji's web-series Mentalhood.