Karisma Kapoor's Thoughts On "Wearing Jeans After A Long Time" 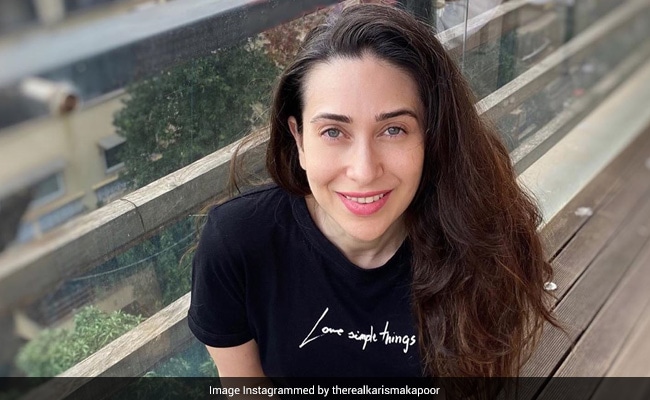 Karisma Kapoor, who often shares her thought of the day on Instagram, added one more to the list on Thursday. With the world functioning with coronavirus restrictions, Karisma Kapoor too, just like all of us, are missing dressing up, even if it's in a pair of denims and a tee. Karisma, who felt like spending the day in a denim pants and a funky black tee, revealed something about herself with the writing on her tee. "Love simple things" it said, which Karisma included in her caption and added this bit about her mood for the day: "Like wearing jeans after a really long time." Karisma, who is mostly accompanied by a cuppa or a drink in her Instagram posts, was clicked posing at her favourite photoshoot spot in the house - her balcony.

Karisma Kapoor misses the whole vibe of going to work in full gangster mode: "Just a regular early morning catching a flight to go to work," she captioned one of her throwback videos.

Karisma is also "missing eating out," which explains this post of hers:

Missing hanging out with her girl gang, Karisma revisited this throwback memory from when masks were not a mandatory part of wardrobe choices.

Karisma Kapoor recently celebrated Ganesh Chaturthi with a Kapoor fam-jam in Mumbai. She was last seen in 2012 film Dangerous Ishhq, after which she featured in special roles in films such as Bombay Talkies and Zero.