To "Best Sister" Kareena Kapoor On Birthday, With Love From Karisma 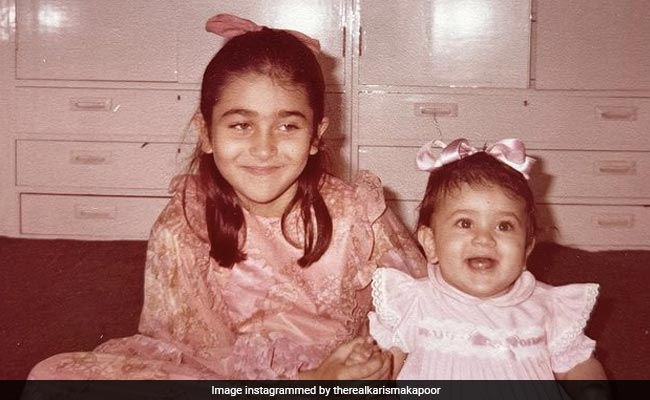 The world has been witness to the strong bond between sisters Karisma Kapoor and Kareena Kapoor Khan several times in the past. The two stars from the Kapoor clan have been extremely vocal about the love that they share for each other. On Kareena Kapoor's 41st birthday on Tuesday (September 21), sister Karisma gave us one more look at their relationship. Sharing two vintage photos of the actresses as children, Karisma Kapoor promised to always be by her sister's side. In the pictures, a baby Kareena and a young Karisma are seen wearing frocks and looking as cute as a button. Also, do not miss the matching bow on both their heads.

With the images, Karisma's heartfelt note said, “Will always be by your side. Happy birthday to the best sister in the world... my lifeline. Love you the mostest.”

Amrita Arora had her own special post dedicated to Kareena Kapoor. Sharing an image of the two, she wrote, “My ride or die, ying to my yang, goblet to my wine. I love you girl. Have the best day and year, our fireball. See you at the console. Love Dj Doll,” with several laugh emoticons.

Not just on her birthday, Kareena Kapoor is a regular fixture on sister Karisma's Instagram timeline. Just a few days ago, Karisma Kapoor posted a picture of the two sisters clicked by Kareena's husband, Saif Ali Khan. “Thanks Saifu for this wonderful memory, can't wait to put it up. Love it,” Karisma said in the caption.

Karisma Kapoor made her debut in the film Prem Qaidi in 1991. She has several hit films to her credit such as Hero No.1, Biwi No.1, Dulhan Hum Le Jayenge, Hum Saath-Saath Hain and Dil Toh Pagal Hai, among others. Kareena Kapoor, on other hand, made her debut in 2000 with Refugee and continues to be one of the biggest stars in the country today.