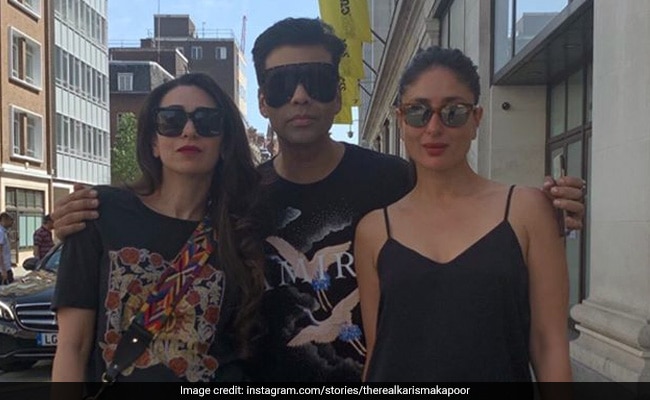 Kareena Kapoor might be a social media recluse but the actress has several fan clubs on social media which keep the actress' fans updated. That, and her close friends and family members also gave us a sneak peek of what the actress' Saturday was like. Kareena spent her Saturday with her sister Karisma Kapoor and filmmaker Karan Johar in London (going by Karisma and KJo's Instagram stories). In the photograph shared by KJo on his Instagram story, the trio can be seen happily posing together as they stand on the streets of London, dressed in colour-coordinated outfits. Karisma and KJo can be seen sporting quirky black tees and denims while Kareena looks chic in a black tank top and denims.

Karan Johar shared the post on his Instagram story and he wrote: "Bebo and Lolo (which are the nicknames of Kareena and Karisma, respectively). Take a look at the picture here:"

Kareena, Karisma and Karan Johar are a part of a close-knit circle which also includes Malaika and Amrita Arora and fashion designer Manish Malhotra.

On the work front, Kareena Kapoor features as one of the judges on the TV dance reality show Dance India Dance. She will next be seen in Good News and Angrezi Medium. Kareena will also star in the period drama Takht, which will be directed by Karan Johar.