Inside Kareena And Karisma's 'Wonderful Afternoon' With Nita Ambani 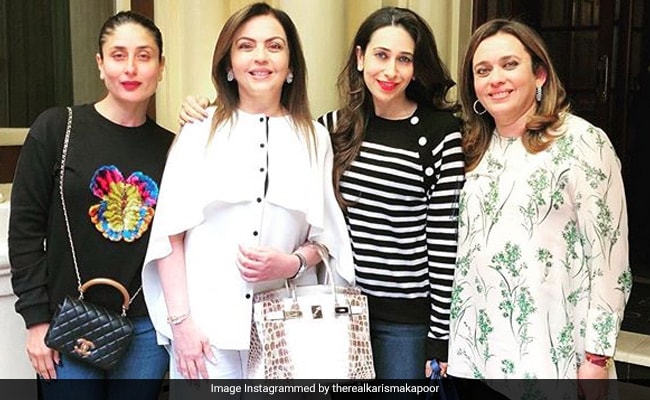 Kareena Kapoor found a spot on Tuesday's list of trends, after the Internet chanced upon her sister Karisma's latest Instagram post, which also features Nita Ambani. Karisma, who is currently on a vacation in London with Kareena and their kids, added a beautiful picture to her London diaries. In the picture, Kareena can be seen wearing a black sweatshirt while Nita Ambani looked elegant in an all-white outfit. Not to miss, Karisma looked pretty in her black-and-white striped sweater. Going by her post, it seems like the ladies had a good time in the city. Sharing the picture, Karisma wrote: "Wonderful afternoon" and she accompanied it with heart emojis.

Karisma Kapoor keeps the excitement level among her fans high by frequently posting photos and stories from her London trip. In one of her previous posts, she could be seen chilling with Kareena and her son Taimur. The caption on her post read: "Lazy Saturday," which she also accompanied with #holidays.

On Saturday, Karisma gave us a glimpse of her family time with Kareena, Taimur, her daughter Samaira and son Kiaan Raj Kapoor. She captioned the post "love" and she accompanied it with a heart emoji.

Several other pictures of Kareena from her London vacation were shared by fanpages dedicated to the actress. Check them out:

Kareena Kapoor, who was last seen in the 2018 film Veere Di Wedding, will next be seen as one of the judges on the TV reality show Dance India Dance. Apart from this, she will also feature in Good News, in which she co-stars with Akshay Kumar, Angrezi Medium and Karan Johar's Takht.