Busy stars Kareena and Saif are often spotted taking on family vacations, be it snow-caked Switzerland or a simple London vacay. 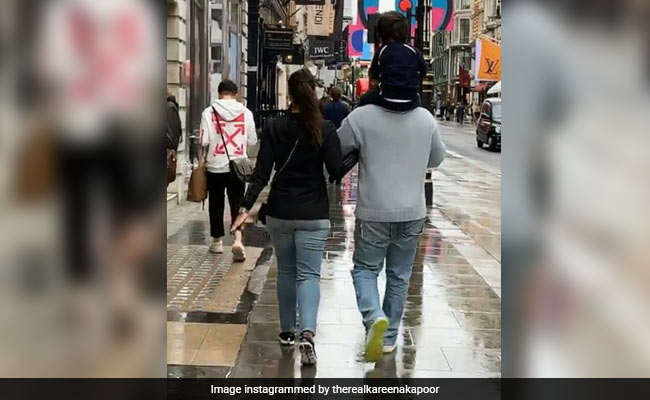 Actress Kareena Kapoor took her work-out and play routine to London, where she is holidaying with son Taimur and actor husband Saif Ali Khan. Photos and video of Kareena, Taimur and Saif went viral on the Internet after a fashion blogger Instagrammed a selfie with Kareena Kapoor and shared a video of the trio on his Instagram story. In a fan-page video, Kareena can be seen strolling on the streets of rain-soaked London with Taimur plonked on Saif's shoulders. In another video shared by Naina Sawhney, who is part of Kareena's team, the 38-year-old actress can be seen sweating it out in the gym.

#KareenaKapoorKhan ... Not giving up even on Holiday

Busy stars Kareena and Saif are often spotted taking on family vacations, be it snow-caked Switzerland or a simple London vacay. In an interview with Bombay Times recently, Saif said that he times his work roster in a way that he gets to spend maximum time with his family: "When I come home after work and find Taimur sleeping, I feel bad. We shoot long hours, but if I haven't packed up even after 8 pm, I feel uncomfortable because it means taking away time from my son." Meanwhile, Kareena strictly maintains a 8-hour working rule.

On the work front, Kareena Kapoor will next be seen in December release Good News, in which she co-stars with Akshay Kumar. She also has Angrezi Medium in the line-up, which will mark Irrfan Khan's comeback movie after his cancer treatment. Kareena is also part of the ensemble cast of Karan Johar's Takht. She also marked her television debut as one of the judges on reality show Dance India Dance.

Saif Ali Khan will return in the second season of Netflix's Sacred Games.