Karisma Kapoor turned a year older on Tuesday and the actress celebrated her 45th birthday with her sister Kareena Kapoor in London. The Biwi No. 1 actress made our day by sharing a stylish yet adorable post of herself and Kareena on her Instagram diaries and we can totally say that the duo, who are one of the most loved sisters in Bollywood, stole the show on the Internet with their picture-perfect poses. In the photo, Karisma can be seen wearing a cute grey-coloured sweater and black culottes. She styled it with black stilettoes. On the other hand, Kareena looked stunning as usual in her pink sweater, denims and brown shoes . The Kapoor sisters are "chilling" in London for a last few days and a glimpse of their quality time can be seen in one of Karisma's Instagram stories, which also features her mom Babita Shivdasani but more on that later. First, take a look how beautiful the sisters are looking in Karisma's latest post:

Actress Amrita Arora, who is known to be a good friend of Karisma and Kareena, showed her love for the duo in the comments section and wrote: "My favourites."

On her Instagram stories, Karisma shared a picture, in which she can be seen posing with Kareena and Babita. With the photo, she wrote: "Like mother like daughters," and we couldn't agree more with her on this. Check it out: 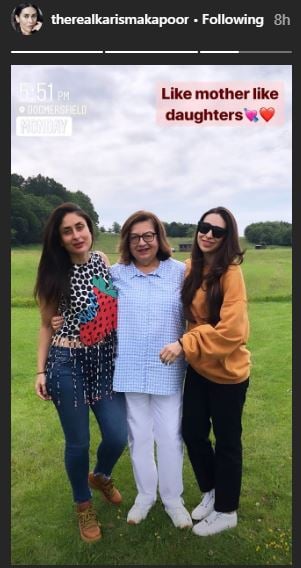 In a separate post on Monday, Karisma shared a picture with Kareena and going by the post, it seems that the sisters were having a gala time at a club named Annabel's in London. Karisma and Kareena can be seen twinning in all-black outfits in the photo, which the former captioned: "Twinning once again #balmain #black #sisters #aboutlastnight." Also, a fanpage dedicated to Kareena Kapoor shared a picture, which features the Kapoor sisters as well as Kareena's husband Saif Ali Khan. Here are the photos we are talking about: