Kareena Kapoor And Taimur Are All Set For Armaan Jain's Wedding

A sneak peek of Kareena Kapoor and Tamiur's OOTD 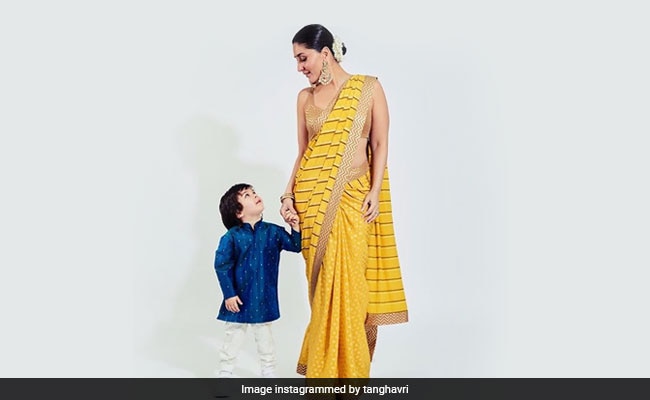 Kareena Kapoor might be a social media recluse but thanks to celebrity stylist Tanya Ghavri, we got a glimpse of the actress' OOTD (outfit of the day) for her cousin Armaan Jain's wedding, which is set to take place on Monday night. Kareena, who was MIA (missing in action) at Armaan Jain's sangeet and mehndi made up for it with a bright yellow saree from the shelves of Nikasha's couture. The actress accessories her look with statement earrings and immaculately tied her hair in a bun. Kareena finished her look with kohl-rimmed eyes, nude lips and gajra wrapped around her hair. Taimur Ali Khan complemented his mother in a blue kurta with polka dots and a white churidar - designed by Raghavendra Rathor. The mother-son duo looks super cute.

Take a look at Kareena Kapoor and Taimur's pictures here:

My favs off to armaan jains Shaadi !!! Bebo in @nikasha_official and taimur in custom @raghavendra.rathore assisted by @nidhijeswani

On Monday, Kareena's sister Karisma Kapoor shared pictures from Armaan Jain's sangeet ceremony on her Instagram profile. The pictures also featured the bride-to-be Anissa, Karima's daughter Samiera and Armaan's brother Aadar Jain. Karsima Kapoor wrote: "Only love." ICYMI, this is the post we are talking about:

Karisma shared pictures from the pre-wedding festivities, which were attended by Shweta Bachchan Nanda, Tara Sutaria, Boney Kapoor and Suniel Shetty besides members of the Kapoor clan. "Love our Indian traditions," read the caption on Karisma Kapoor's post.

Kareena Kapoor was last seen in the hit film Good Newwz, co-starring Akshay Kumar, Diljit Dosanjh and Kiara Advani. The actress will next be seen in Karan Johar's period drama Takhtand Aamir Khan's Laal Singh Chaddha, which is a remake of the 1994 film Forrest Gump.