"I love you so much Mama! Your babies are waiting at home with a cake and a song!" wrote the filmmaker 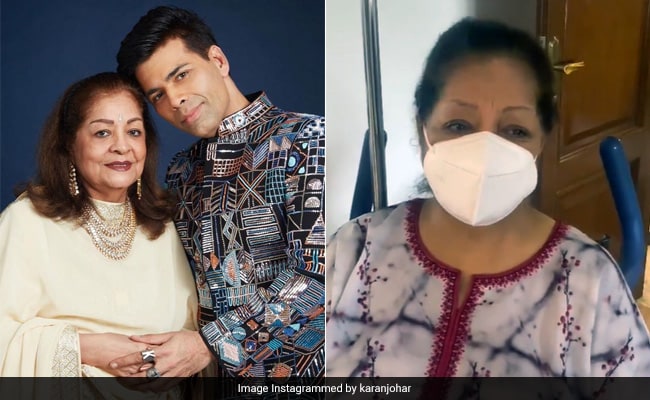 Filmmaker Karan Johar, in an Instagram post on Monday, revealed that his mother Hiroo Johar underwent two "massive surgeries" in the past eight months and that she "endured both surgeries with her indomitable spirit." Hiroo Johar is 79 but she has the "zest for life" just like a millennial. Karan shared a video of his mother, in which she can be seen thanking Dr Bhojraj for her Spinal Fusion Surgery and Dr Maniar for her right knee replacement surgery while sitting in a wheelchair. He wrote: "My Mother ... My superhero! She has had two massive surgeries in the lockdown.... In the past 8 months... Her Spinal Fusion Surgery (brilliance of Dr Bhojraj) and her right knee replacement (the Genius of Dr Maniar)."

"She endured both surgeries with her indomitable spirit and a sense of humour.... She is nearly 79 but has the spirit and zest for life as a millennial does! I am so so proud of her .... I love you so much Mama! Your babies are waiting at home with a cake and a song!" added Karan Johar, who is a father of twins Yash and Roohi.

Karan Johar lives with his mom and his kids. See these adorable pictures of the little munchkins with their father:

Karan Johar has directed movies such as Kuch Kuch Hota Hai, Kabhi Khushi Kabhie Gham, My Name Is Khan and Student Of The Year. He is also directing Ranveer Singh and Alia Bhatt in Rocky Aur Rani Ki Prem Kahani. His upcoming projects as a producer include Sooryavanshi, Dostana 2, and Brahmastra. He has backed many films such as Kal Ho Naa Ho, Kaal, Kabhi Alvida Naa Kehna, Wake Up Sid, Agneepath, Yeh Jawaani Hai Deewani and Badrinath Ki Dulhania among others.

Karan Johar's last movie as a producer, Shershaah, has been getting positive reviews ever since it premiered on Prime Video earlier this month. He is also bankrolling Liger, which has Telugu star Vijay Deverakonda and Ananya Panday in lead roles.