In the video, Yash and Roohi are seen singing and dancing to Disco Deewane 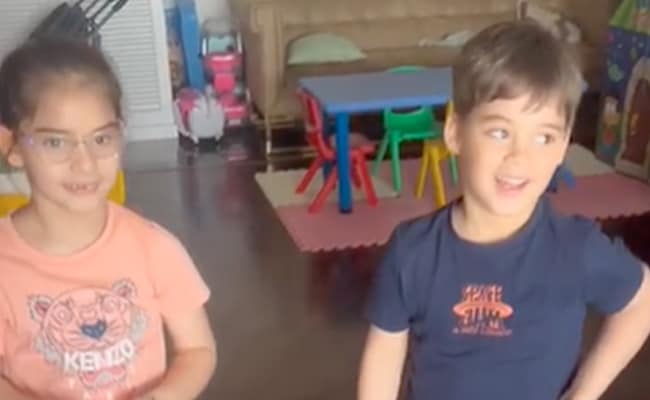 A still from the video. (courtesy: karanjohar)

Karan Johar has been treating fans to images and videos of his children, Yash and Roohi Johar, for some time now. Oh, and, if the social media posts are anything to go by, the twins are fans of Bollywood movies just like their doting father. Over the weekend, Karan Johar shared another cute video of his children expressing their love of movies. This time, Yash and Roohi picked a song from their father's film Student Of The Year to groove to. In the clip, the little munchkins are seen singing and dancing to the hit track Disco Deewane dressed in their casual best at home.

While the two may have got the lyrics adorably mumbled, they performed the hook step of the song to perfection.

Recently, on the occasion of Diwali, Karan Johar shared a family portrait with his children and mother Hiroo Yash Johar. To mark the day, the family dressed up in matching clothes. Sharing the lovely photo, Karan wrote, “Happy Diwali from my world to yours! Thank you, Manish Malhotra, for our beautifully coordinated clothes... Sending you all so much love and light.”

Meanwhile, on the work front, Karan Johar shared an exciting update about his next directorial project Rocky Aur Rani Ki Prem Kahani, over the weekend.

In a detailed Instagram post, Karan Johar shared his thoughts about the film, in addition to revealing the movie's release date. He wrote, “After 7 years, it's time for me to return to my first home - the cinemas. I had the absolute honour of working with not one, but many illustrious actors on the set of my film. The familial nostalgic feeling of an ensemble cast, creating music that captivates the hearts and a story that runs deep to the roots of our family traditions. It's that time again -to huddle with your family and friends, buy popcorn and witness just sheer love and entertainment unfold on the big screen. We're overwhelmed and impatiently excited to finally inform...Rocky Aur Rani Ki Prem Kahani in cinemas on April 28, 2023.”