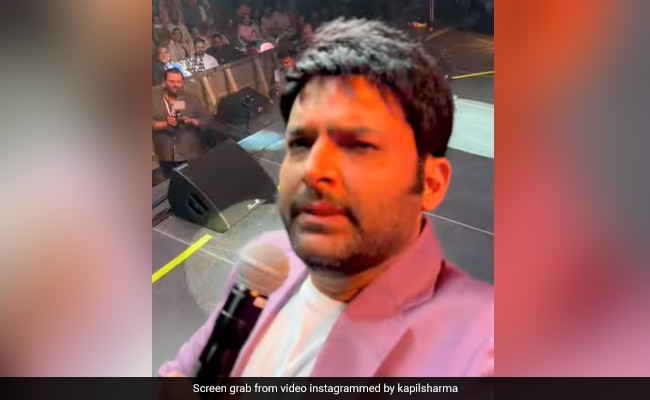 Kapil Sharma's Instagram timeline is a fun place. The ace comedian always makes it a point to make everyone laugh their hearts out with his impeccable comic timings. And, he has done it again by sharing a clip from his recently concluded tour. The video is from the last leg of Kapil Sharma Live tour in Canada. The latest post is dedicated to his wife Ginni Chatrath. The video opens with a sea of people cheering for Kapil Sharma. A few frames later, the comedian, addressing his wife, says, “Ginni, tum meri kabhi nahi sunti. Dekh kitne log mujhe yaha sunane aye hai. Ginni, you never listen to me. Now, look at the crowd here. They are here for me.” He then cheekily adds, “Woh bhi ticket kharch kar ke. That too after paying for a ticket.”

Kapil Sharma, without giving a second thought, just wrote, “Sorry, Ginni Chatrath,” in the caption. Kapil Sharma's friends from the industry have made a Bee-line to the comment space. Singer Afsana Khan dropped face with tears of joy emojis. Singer Richa Sharma found it equally funny.

Kapil Sharma has also penned a special thank you note for the Vancouver audience. Along with a set of pictures from the show, the comedian wrote, “Thank you, Vancouver, for all the love and warmth. You guys are as beautiful as your city.” Singer Mika Singh replied with a bunch of raising hands emojis.

And, this is what Kapil Sharma's “tribe” looks like. As per the comedian, “Crew that laughs together stays together.”

So what do you have to say about Kapil Sharma's Canada diaries?