Rangoli's problem with Taapsee - that she didn't name Kangana in an appreciation tweet for the trailer of Judgementall Hai Kya? 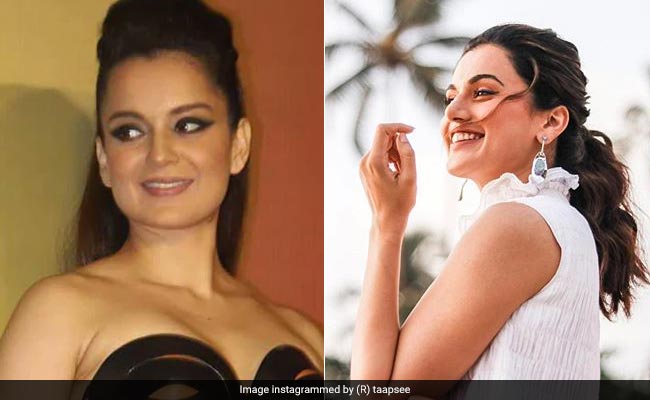 Kangana Ranaut's sister Rangoli Chandel has opened a new front on Twitter and is on an extraordinary rant against actress Taapsee Pannu and filmmaker Anurag Kashyap. She's kept it up for some hours already, after beginning last night. Rangoli's problem with Taapsee - that she didn't name Kangana in an appreciation tweet for the trailer of the actress' new film Judgementall Hai Kya? In retaliation, Rangoli called Taapsee a 'sasti copy' of Kangana and attacked for allegedly saying the actress needed a 'double filter.' Schooled by Anurag Kashyap, who told Rangoli she was 'going too far, this is really really desperate' and that 'praising the trailer means praising all aspects of it,' Rangoli responded that she was 'tired of people taking digs at Kangana.'

Rangoli Chandel also claimed that Anurag Kashyap called Kangana Ranaut after the exchange to say that Taapsee Pannu had always been a fan of her work. In this morning's tweets, Rangoli disputed this and challenged the filmmaker to 'give one media interaction where she said this.' Who wouldn't like to be Kangana Ranaut, tweeted her sister, also alleging that while Taapsee Pannu copies her, she also attacks her publicly and calls her 'extremist.'

Rangoli Chandel offered no evidence of Taapsee Pannu having actually said any of this. Read the startling exchange here; it all began with Taapsee calling the trailer 'cool,' instantly sending Rangoli in confrontational mode -

Sir you can see it's not about mentioning Kangana so much, clearly lot of people I have thanked haven't mentioned her, it's just that I am tired of people taking digs at her, who is this Taapsee to claim that Kangana needs double filter....(contd) @anuragkashyap72https://t.co/YRSd3MhcYH

(Contd)....so now I am here showing everyone mirror.... I know you are working with her but please don't get desperate without understanding the real issue ... back off @anuragkashyap72

You @anuragkashyap72 have been calling Kangana last night and telling Taapsee is her fan, give me one media interaction where she said that, infact she always calls Kangana extremist, Kangana has opinions so what? Why call her filter and extremist....(contd)

(Contd)..Taapsee is a fan & loves to copy her yes we all are, who wouldn't like to be like Kangana bt why attack her and take digs, yeh sab shanagiri nikalne keliye he toh main twitter pe ayi hun thank u very much magar sab ki pol khulegi koi nahin rok sakta @anuragkashyap72

As Rangoli Chandel did remark on in one tweet, others also failed to name Kangana Ranaut in their posts on the Judgmentall Hai Kya? trailer. Anurag Kashyap did but Varun Dhawan didn't - he posted a tweet about the 'amazing lead and supporting cast' which Rangoli deemed inadequate praise for her sister. 'MKangana ka Naam bhi likh dete,' she tweeted to Varun, despite his not having named a single cast member of the film. Varun gracefully posted a second tweet:

Rangoli Chandel is Kangana Ranaut's spokesperson on Twitter - the actress is not on social media - and is known for her belligerent style of tweeting. She faces a court summons in a defamation case filed by actor Aditya Pancholi and his wife Zarina Wahab based on her tweets.

Rangoli Chandel has also made a target of Hrithik Roshan and his family in her tweets over the last week, accusing them of hitting and sedating Hrithik's sister Sunaina over an alleged romance with a Muslim journalist.

Judgmentall Hai Kya? is produced by Ekta Kapoor and co-stars Rajkummar Rao. The film recently changed its name from Mental Hai Kya? after backlash. It will release on July 26.