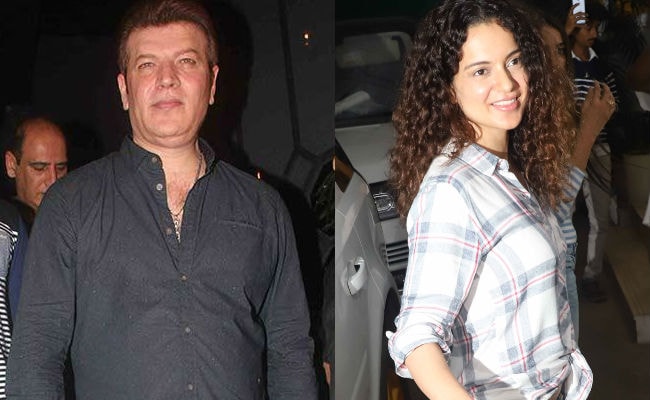 A file photo of Aditya Pancholi and Kangana Ranaut.

Kangana Ranaut's sister Rangoli Chandel has accused actor Aditya Pancholi of extorting money from them, revealing on Twitter that a case of assault that the actress had filed against Mr Pancholi has been revived now in retaliation for 'everyday cases from him and his wife.' This week, Kangana Ranaut and Rangoli Chandel received summons from a Mumbai court in four separate defamation cases filed against them by Aditya Pancholi and his wife Zarina Wahab. Yesterday, Mr Pancholi was booked on a rape complaint filed by an actress; he has claimed he's being 'falsely implicated.'

In her tweets, Rangoli Chandel alleged that Aditya Pancholi billed Kangana Ranaut Rs 1 crore for grocery expenses when she was homeless for three months, and that he asked for more money later and sent Ms Chandel a 'message of extortion' in 2016. Rangoli Chandel says that Aditya Pancholi and Zarina Wahab are 'finding a lot of strength in the fact that Kangana is very busy.'

Kangana Ranaut and Aditya Pancholi, who has been married to Zarina Wahab since 1986, allegedly dated for some months several years ago when she was starting out in Bollywood. Two years ago, the actress claimed on TV show Aap Ki Adalat that Mr Pancholi had assaulted and abused her. She also told NDTV in an interview, "When this man who used to be my father's age, he hit me so hard that my head was...I fell on my head on the floor and it started to bleed. I must have been 17 or something. I picked up my sandal and I hit his head hard and it started to bleed as well."

The defamation cases Aditya Pancholi and Zarina Wahab have filed are based on Kangana Ranaut's interviews to the media and Rangoli Chandel's tweets. The next hearing is scheduled for July 26.

Kangana Ranaut has claimed that she reached out to Aditya Pancholi's wife Zarina Wahab for help during the alleged assault; Ms Wahab denies this. She also recently told Deccan Chronicle: "You can't be in a relationship with someone for years and then suddenly accuse him of rape just because the relationship has ended, or because the other person has moved on. It's just not right... I know what has happened in the past. He has done no wrong."

Kangana Ranaut and Rangoli Chandel are also involved in a public feud with actor Hrithik Roshan and his family; they have accused the Roshans of violence against Hrithik's sister Sunaina Roshan because of her alleged romantic involvement with a Muslim journalist.

Kangana Ranaut's upcoming projects are Mental Hai Kya and Panga. She has also signed up for the J Jayalalithaa biopic. Aditya Pancholi's last onscreen appearance was in 2016 film Bajirao Mastani.