'Why should I shut up, you idiot?' tweeted Rangoli Chandel 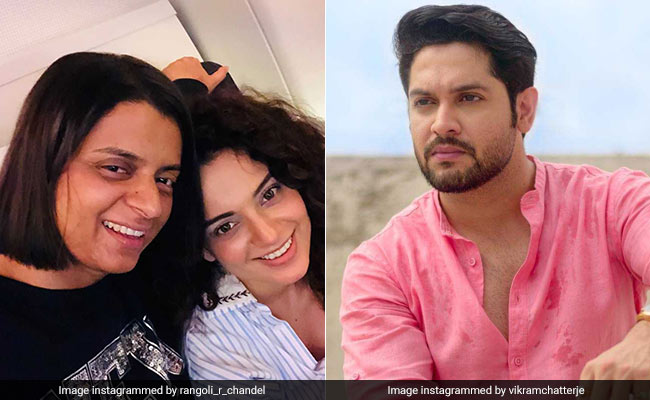 It's now Kangana Ranaut's sister Rangoli Chandel versus Taapsee Pannu, Anurag Kashyap and Bengali actor Vikram Chatterjee in a multi-way Twitter fight that has been raging since Wednesday night. Anurag and now Vikram have jumped to Taapsee's defence after a salvo of tweets fired by Rangoli from her seemingly inexhaustible supply, attacking Taapsee for not naming Kangana in a post praising her new film's trailer and for allegedly saying she needed a 'double filter.' Rangoli turned on Anurag when he protested that she had 'gone too far' and has now locked horns with Vikram Chatterjee. Meantime, Kangana told SpotboyE that Rangoli was simply 'protecting' her.

In response to Rangoli Chandel's tweet calling Taapsee Pannu a 'sasti copy,' Vikram Chatterjee tweeted: "With all due respect to Kangana Ranaut for the actress she is and zero to this woman who needs to just shut up, Taapsee you are a fantastic actress and we have loved your performances to the core." Unsurprisingly, it enraged Rangoli, who fired back in her minatory style with existential advice on opinions and the nature of democracy: "Why should I shut up you idiot, did I write it on your wall? You can write opinions on my opinions without realising my opinion is the mother opinion, very reason for your opinion."

Why should I shut up u idiot,did I write it on your wall?? U can write opinions on my opinions,without realising my opinion is the mother opinion very reason f ur opinion, ha ha u give urs I give mine,it's a democracy tere baap ki tanashahi nahin hai...So don't ask me to shut up https://t.co/nglJJEdGu5

Rangoli Chandel wasn't done with Anurag Kashyap either, posting this almost an entire day after her original Twitter offensive against him:

A woman is making fun of another woman mocking her stands on various issues and @anuragkashyap72 ji is laughing wah!!! Kya baat hai ... Talk about double standards ... https://t.co/vbfjcsLHxj

It began when Taapsee Pannu praised the trailer of Kangana Ranaut's new film Judgementall Hai Kya? without singling her out. It snowballed from there - here's how it went down.

Sir you can see it's not about mentioning Kangana so much, clearly lot of people I have thanked haven't mentioned her, it's just that I am tired of people taking digs at her, who is this Taapsee to claim that Kangana needs double filter....(contd) @anuragkashyap72https://t.co/YRSd3MhcYH

(Contd)....so now I am here showing everyone mirror.... I know you are working with her but please don't get desperate without understanding the real issue ... back off @anuragkashyap72

You @anuragkashyap72 have been calling Kangana last night and telling Taapsee is her fan, give me one media interaction where she said that, infact she always calls Kangana extremist, Kangana has opinions so what? Why call her filter and extremist....(contd)

(Contd)..Taapsee is a fan & loves to copy her yes we all are, who wouldn't like to be like Kangana bt why attack her and take digs, yeh sab shanagiri nikalne keliye he toh main twitter pe ayi hun thank u very much magar sab ki pol khulegi koi nahin rok sakta @anuragkashyap72

Rangoli also called out Varun Dhawan for failing to name Kangana, a situation he quickly remedied:

Speaking to SpotboyE, Kangana Ranaut offered a defence of her sister: "I read Rangoli's tweets, she was lovingly teasing Varun as he never responded to her when she urged him to speak about Manikarnika, and Tapsee has been saying derogatory things about me - like needing a filter and being an extremist, which Rangoli is clearly upset about - this has nothing to do with her JHK tweet. The way Anurag is protecting Taapsee, my sister is protecting me! What's the matter, anybody has problems with her tweets, can unfollow her."

Rangoli Chandel, who is also Kangana Ranaut's manager, has been summoned by a Mumbai court in a defamation case filed by actor Aditya Pancholi and his wife Zarina Wahab based on her tweets. Kangana has also been summoned for defamation. In the recent past, Rangoli has used her Twitter account to accuse Hrithik Roshan and family of hitting and sedating his sister Sunaina over an alleged romance with a Muslim journalist.