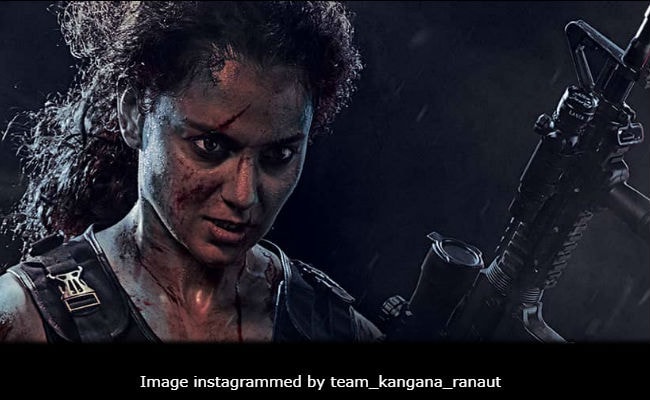 A new poster of Kangana Ranaut's upcoming film Dhaakad, featuring the 32-year-old actress, dropped on the internet with this description, "She is fiesty, she is fierce and is ready to set all guns ablaze! On Diwali 2020, brace yourself for the biggest action entertainer." Kangana Ranaut's Dhaakad was announced over the weekend with a poster presenting a distant shot of the actress in a battlefield of sorts. In the new poster, Kangana appears in a Rambo-esque look, with battle scars and firing machine guns relentlessly. In an interview with IANS, Kangana explained that Dhaakad is one-of-a-kind female-led action film.

Take a look at the new poster of Dhaakad:

And here's the previous poster:

She is badass. She has got the nerves of steel. She is #Dhaakad!! . On Diwali 2020, get ready to witness #KanganaRanaut in a never seen before avatar in the biggest action entertainer! @razylivingtheblues @asylumfilmsofficial @smaklai @sohelmaklaiproductions @dhaakadmovie

"The film is mounted on a large scale, is one of a kind female-led action film and is apt for a Diwali release. If it is received well, there will be no looking back for women in Indian cinema," Kangana added.

Dhaakad is directed by Razneesh "Razy" Ghai and it is slated for Diwali 2020 release.

Before Dhaakad, Kangana Ranaut will be seen in Judgementall Hai Kya releasing on July 26.