"I understand, of course, being an ex-wife, her experience is very different," said Kangana Ranaut 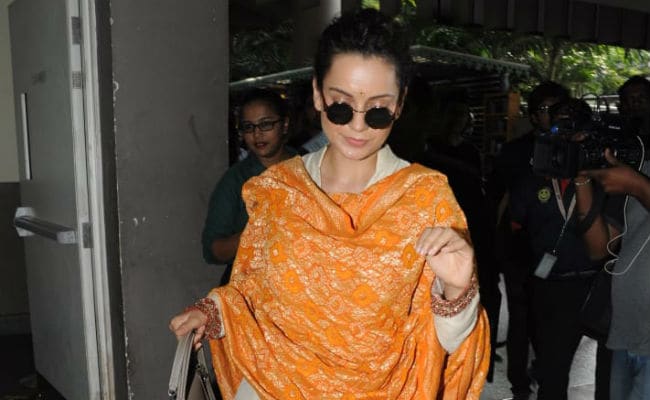 Kangana Ranaut responded to the 'loop holes' pointed out by Vikas Bahl's ex-wife Richa Dubey in the actress' claims of Mr Bahl's alleged misconduct. "Being an ex-wife his social behavior may not be known to her that well, the equation has changed so may be her experience is different, shall we settle at that? Like I said, the harasser and the victims who have shared their harassment are different from my experience, this maybe the case but I am not saying that the other person is wrong or Richa is wrong," the actress said in a statement on Saturday. In a tweet on Friday, Ms Dubey accused Ms Ranaut of 'misusing' the #MeToo campaign and questioned as to why she continued to 'have a good friendship' with the filmmaker if he indeed was intrusive with her. Ms Dubey also attacked Ms Ranaut for catching up 'wining and dining' with Vikas Bahl regularly, who she later named in the wave of #MeToo accusations. Vikas Bahl directed Ms Ranaut in the National Award-winning film Queen.

'Stop using Vikas for your own vendetta, it is not cool,' wrote Ms Dubey, who also added that she's 'not interested in a media battle with' Ms Ranaut. At several instances in her statement, Ms Dubey also appeared to hint at Kangana Ranaut's public feud with Hrithik Roshan, which made headlines almost all of last year. Soon after, Richa Dubey signed off from Twitter with this message: "I said what I had to say... going off twitter."

In her statement, Kangana Ranaut also said that instead defending the alleged, women should ensure that workplace safety is ensured: "The bottom line is that we need to make this place secure and all that is happening is good, that the moment allegations are being raised people are taking away work from them, otherwise these people are shameless otherwise they will never be ashamed of what they are doing. "

Vikas Bahl's name cropped up in the #MeToo accounts after an expose by Huffington Post India revealed that dissolving Phantom Films (formerly co-owned by Anurag Kashyap, Vikramaditya Motwane, Madhu Mantena and Vikas Bahl) was the outcome of an investigation launched against Mr Bahl based on sexual harassment allegations by a former colleague. Soon after, Kangana Ranaut revealed that she too had experienced unwelcome behaviour from the director. "Every time we met, socially greeted and hugged each other, he'd bury his face in my neck, hold me really tight and breathe in the smell of my hair. It took me great amount of strength and effort to pull myself out of his embrace. He'd say 'I love how you smell K'. I could tell something is wrong with him," she told India Today. Since the HuffPost expose, three actresses, including another Queen actress Nayani Dixit, have accused him of sexual misconduct.

After Vikas Bahl was implicated as an alleged harraser, Mr Kashyap and Mr Motwane tweeted saying they believed Mr Bahl is guilty of sexual misconduct after which Mr Bahl sent notices to his former work partners asking them to apologise. Actors such as Arjun Kapoor and Imran Khan also reacted to the allegations against Vikas Bahl and said Bollywood was well aware of Vikas Bahl's alleged predatory nature. As a result of steps taken by Bollywood against the accused, Vikas Bahl is no longer co-producing Kabir Khan-directed '83 and he will be kept away from the promotions of Hrithik Roshan's Super 30.

Meanwhile, actors such as Aamir Khan and Akshay Kumar have distanced themselves from projects such as Mogul (to be directed by Subhash Kapoor) and Housefull 4 (to be directed by Sajid Khan). Subhash Kapoor is accused of molesting actor Geetika Tyagi in 2014 and the matter is in court while Sajid Khan has been implicated in separate #MeToo accounts by three women. Of Bollywood's move against the alleged, this is what Ms Ranaut had to say: "I'm impressed with their decision of not working with people who have allegations of harassment, otherwise this will just become a shallow talk. There should have been something concrete coming out and what is concrete is that taking power away from these people will only lead to betterment without power who will these people then harass. Then no one will get harassed."