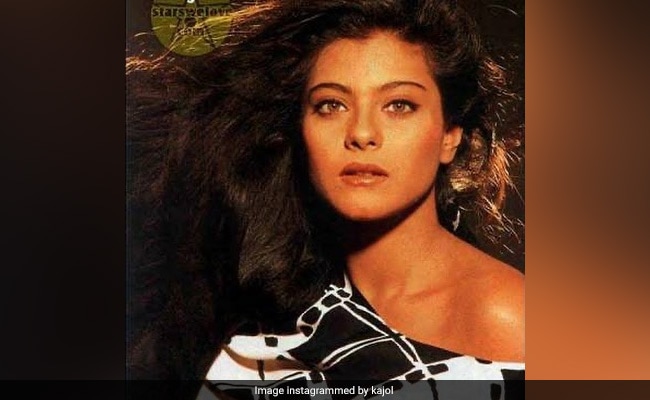 Just like us, Kajol also believes that "classics never get old" and her latest post on Instagram even proves it. The actress, continuing her Throwback Thursday game, took a trip down memory lane and dug out an old photo of herself. In the picture, clicked by late photographerGautam Rajadhyaksha, the actress looks stunning as she poses for the cameras dressed in a black and white outfit. Going by the post, it appears that Kajol's photograph is from one of her photoshoots in the Nineties. Sharing the picture on social media, the actress tagged make-up artist Mickey Contractor and wrote: "Classics never get old." She also used the hashtag #Gautam for her late photographer friend, who was also the screenwriter for her first film Bekhudi.

It wouldn't be wrong to say that Kajol's throwback game is getting stronger every day. Be it an old picture from one of her films' sets or one from her late Nineties or early Twenties photoshoots, Kajol looks stunning in all of her pictures. We have handpicked a few for you, take a look:

When u can't find a book and resort to the newspaper finally !! #tbt #alwaysreading #booksrock

One from Mr Menons archive ..... when my hair touched my waist .... #sapne #arrahman #music #funmemories

Wishing everyone a light filled bright happy prosperous Diwali. Let the light in your houses echo in your hearts and let's light up the world with our positivity instead of crackers ;) .

On the work front, Kajol was last seen in Tanhaji: The Unsung Warrior, which also stars her actor husband Ajay Devgn. The duo played onscreen husband and wife in the film. Directed by Om Raut, Tanhaji: The Unsung Warrior featured Ajay as Tanaji and Kajol as Tanaji Malusare's wife Savitribai Malusare. The film also stars Saif Ali Khan, Sharad Kelkar and Neha Sarma. Kajol's next project is a short film - Devi. Directed by Priyanka Banerjee, the film will open in theatres on March 2.