Kajol Wants To Quit This Bad Habit. Details Inside 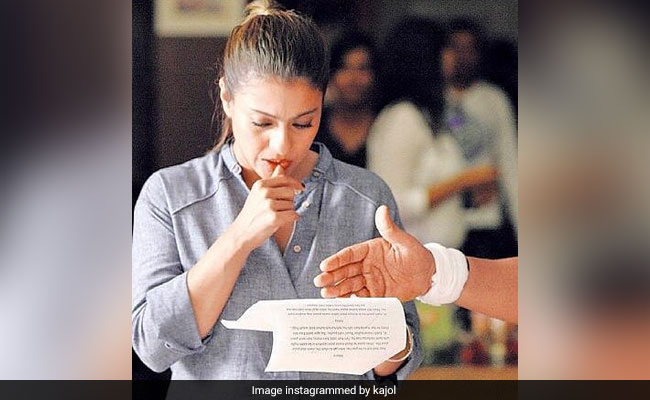 Every day we wake up with a list of things we will do or won't do in a bid to be the best version of ourselves. Whether it's promising to start working out, vowing to cut down on junk food or even something as simple as finally getting that much-needed haircut, we all have areas that could do with some improvement. While we make several promises and plans for each day, how many of us actually follow through with them?  And actress Kajol seems to know exactly what we are talking about.  And the picture that the talented actress shared of herself on Instagram on Tuesday is proof.

In it, the 46-year-old is seen going through her script. But it was what she was doing with her hand while reading the script that made us all giggle. The actress was candidly caught biting her nail as she was reading. Making the post funnier is her caption, in which she said, “I will not bite my nails today.”

This isn't the first time Kajol has tickled our funny bones with her witty sense of humour. In an earlier post, the talented actress had shared a picture of herself relaxing with a vinyl record in her lap. It was the caption of the picture that made us laugh, “ I have 3 moods 1. Let the music play without any interruption 2. Skip Every Song 3. Play the same song again and again on repeat for days. What's yours??” Well, that sounds like something all of us would do.

Proving yet again that she is the queen of witty Instagram captions, Kajol had posted a fun behind-the-scenes video from her hit movie Kuch Kuch Hota Hai. In the video, we see Shah Rukh Khan and her cycling before Kajol loses control of her cycle and falls. In the caption she wrote, “And a very Happy Bicycle Day to you too” and added an eye-rolling emoji.

Kajol is best known for her performances in films such as Baazigar, Yeh Dillagi, Dilwale Dulhania Le Jayenge, Kuch Kuch Hota Hai and Gupt: The Hidden Truth. She was last seen in the Netflix film Tribhanga.

Karan Johar Wants To "Date Instagram." But Why? He Says...