The actress recently shared a behind-the-scenes clip from the sets of her film, Kuch Kuch Hota Hai 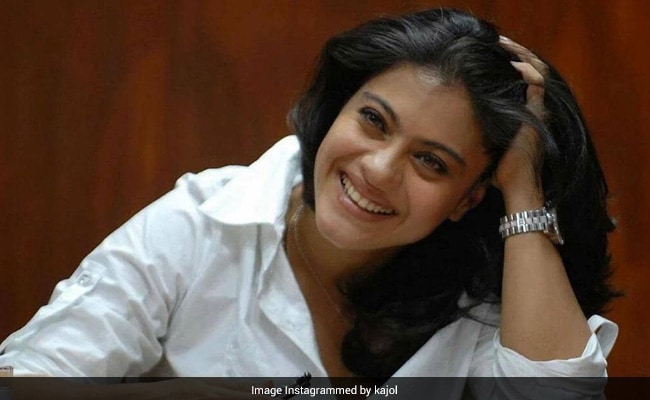 For nearly three decades now, Kajol has remained a favourite among scores of Hindi film lovers. While her acting prowess and stunning looks have been appreciated since her debut in 1992, it is her off-screen persona that has impressed fans over time. The 46-year-old is known for her intelligence, honesty and humour. And the actress also often places herself at the receiving end of her jokes. Kajol's wit and self-deprecating humour are evident from her special media posts. In one such instance, the actress on Thursday shared a behind-the-scenes clip from the sets of her hit 1998 film Kuch Kuch Hota Hai.

On World Bicycle Day, the actress decided to post a video that features herself and co-actor Shah Rukh Khan cycling during the shoot of the song Yeh Ladka Hai Deewana. But there's a twist. This video is no proof of the actress' elegance. Instead, it features Kajol falling off the bike rather clumsily and injuring herself. Sharing the clip, she wrote, “And a very Happy Bicycle Day to you too,” followed by a 'rolling eyes' emoji. Reacting to it, director Karan Johar, who helmed the film, said, “Oh god! I remember this so clearly! And can't forget what happened after.” Fans, too, reacted to the post with laughter emoticons. One even said, “Omg..not that I like you to fall but can't stop laughing.”

In another such post, the actress gave us a look at her “bunny” face thanks to a filter. Since it was Easter, the actress aced the Easter Bunny look and was not afraid to make a funny face for the camera by sticking her tongue out. In the caption, she wrote, “Dashing through the snow…No...no...sorry...wrong holiday...Happy Easter.” The lack of vanity is refreshing, isn't it?

Another favourite of ours is a meme that Kajol shared of herself and admitted that she was a “gobbler”. In the photo, Kajol is seen casting a sideways glance with a note that read, “The biggest scam is cooking for 2 hours just to eat for 10 minutes.” The actress admitted that she was no elegant eater in the caption by confessing, “Traits of a gobbler.”

When Kajol came across a photo of herself where she was caught off guard and hence was making a less than flattering expression, she did not delete it. Instead, she decided that it was just what her Instagram fans needed to see. Sharing the photo, she wrote, “National Sarcasm Society: Like we need your support.”

Kajol, who is now a fashionista sporting the trendiest looks in town, did not forget to give her fans a look at her not-so-stylish days. She shared a photo of herself sporting a perm, leaving fans in splits. The photo carried a note that read, “What? I swear the hairstyle was in trend...Once upon a time.” Admitting that it was a bad fashion move, she wrote, “I swear…”

Well, we love how Kajol wears her superstardom so easily and can't wait to laugh at her next funny post.