"I remember this so clearly! And can't forget what happened after," commented KJo hilariously on Kajol's post 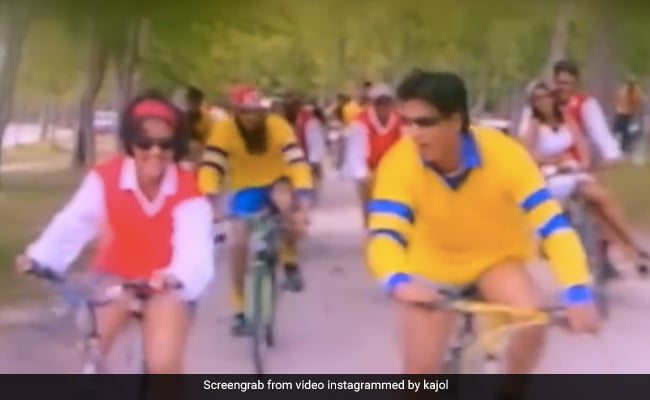 On World Bicycle Day, Kajol picked an epic sequence from her 1998 film Kuch Kuch Hota Hai to wish her fans on social media. The scene we are talking about here is when Kajol had an accident while cycling with Shah Rukh Khan for the song Yeh Ladka Hai Deewana. On Thursday, Kajol posted a short clip from the aforementioned song that features her falling off the bicycle she was riding with Shah Rukh. "And a very Happy Bicycle Day to you too," wrote Kajol with a rolling eye emoji and the hashtag #WorldBicycleDay. In the comments section, filmmaker Karan Johar, who directed Kajol, Rani Mukerji and Shah Rukh Khan in Kuch Kuch Hota Hai, hilariously wrote: "Oh god! I remember this so clearly! And can't forget what happened after" and dropped a laughing icon.

Here's what actually happened when Kajol and Shah Rukh Khan were shooting for the track Yeh Ladka Hai Deewana - in several interview earlier, Kajol had revealed that while filming the song, she lost her balance and fell off the cycle, after which she bruised her knee and also "lost her memory." She only remembered one person - her husband Ajay Devgn. Karan Johar called Ajay Devgn on set and helped Kajol after she regained consciousness.

And here's the song during the shooting of which Kajol had an accident:

Kuch Kuch Hota Hai, made on a budget of Rs 10 crore, is said to be the highest-grossing Bollywood film of 1998, which reportedly collected over Rs 100 crore across the globe. The film also starred Anupam Kher, Sana Saeed, Farida Jalal, Reema Lagoo and Archana Puran Singh.