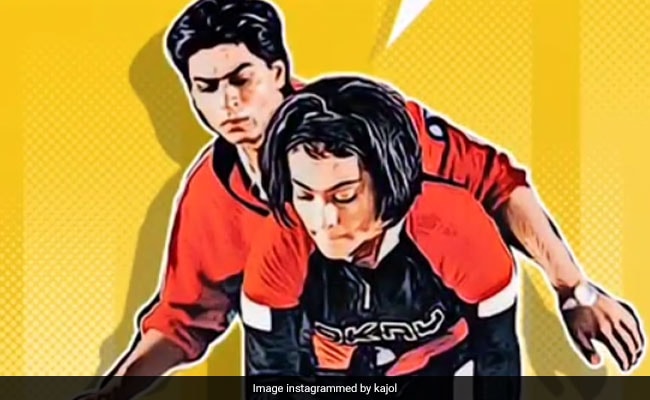 "Kuch kuch hota hai Rahul... tum nahi samjhoge..." - how many of you know this dialogue by heart? Kuch Kuch Hota Hai released on October 16 22 years ago and continues to remain a favourite of Bollywood cine-buffs. Kajol, who co-starred with Shah Rukh Khan and Rani Mukerji in Karan Johar's directorial debut, celebrated 22 years of the film with a bunch of cartoons on Instagram. Kajol zeroed in on three of her favourite dialogues from the movie and shared their cartooned versions on Instagram. "All cartooned out 22 odd years later," wrote Kajol. Referring to a dialogue spoken by Kajol - "Mera pehla pyaar adhura reh gaya, Rifat bai" - Karan Johar wrote: "My favourite line."

In Kuch Kuch Hota Hai, Karan Johar combined two love triangles set in different timelines, the first of which featured three college friends Rani as Tina, Kajol as Anjali and Shah Rukh as Rahul. The dialogue Karan Johar picked as his favourite is from a heart-wrenching scene when Anjali realises that Rahul is in love with Tina and not her.

Manish Malhotra, who was the costume designer of the film and also made a blink-and-miss appearance, wrote: "Memories and my favourite film." Take a look at Kajol's posts here:

On his own Instagram, Karan Johar shared a montage of Kuch Kuch Hota Hai, also featuring glimpses of Rani Mukerji, Kajol and Shah Rukh Khan's old interviews for the film. "22 years of Kuch Kuch Hota Hai....memories of a lifetime ... eternally grateful for all the love," he wrote.

#22yearsofKKHH.....memories of a lifetime ...eternally grateful for all the love ❤️🙏

Meanwhile, Anupam Kher, who played the role of Rani Mukerji's father in the movie, reminded Dharma Productions that he too was in the movie after he wasn't tagged in a tweet:

Kuch Kuch Hota Hai, made on a budget of Rs 10 crore, is said to be the highest-grossing Bollywood film of 1998, which reportedly collected over Rs 100 crore across the globe. The film also featured Sana Saeed, Farida Jalal, Reema Lagoo and Archana Puran Singh.