Kader Khan, 79, Is In Canada But Not For Treatment, Says Director Of His Last Film 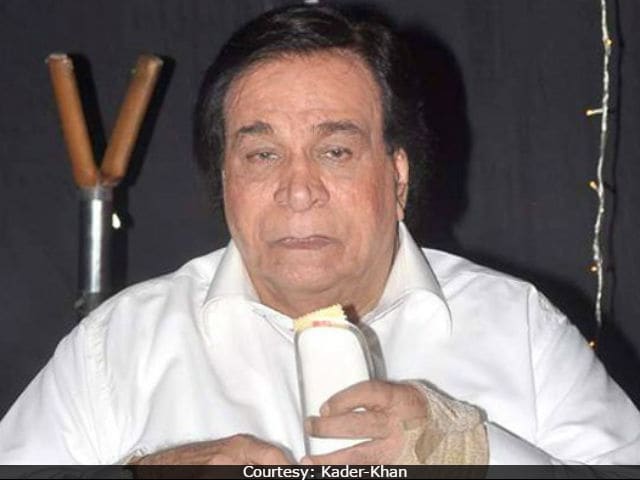 Kader Khan has worked in over 300 films (Courtesy: Kader-Khan )

New Delhi: Veteran actor Kader Khan is indeed in Canada but not because of a medical emergency, reports news agency IANS. The 79-year-old was reported by SpotboyE to have been rushed abroad for treatment - this is not accurate, a source told IANS. Mr Khan has been in Canada for the last few months, living with his son, said Fauzia Arshi, director of Mr Khan's last film Hogaya Dimaagh Ka Dahi. "He (Kader Khan) has been in Canada since three to four months. He is alright. He is in Canada because his elder son stays there, so he is with him. There's nothing like was he rushed to Canada or anything of that nature. Everything is fine," Ms Arshi told IANS.

Kader Khan has reportedly been in a wheelchair after getting knee surgery in 2015. SpotboyE quoted actor Shakti Kapoor as saying, "Yes, Kader Khan is now in a wheelchair. It's so so sad to be talking about this and I am trying to reach him since the past few days, but I am not able to get his number. I hope to have it in the next 2-3 days."

Shakti Kapoor also told SpotboyE, "Kader Khan's elder son resides in Canada. So, he has gone there to avail medical facilities which can cure him. I think his wife is accompanying him."

Last year in April, rumours that Kader Khan had died swiftly went viral. However, a source close to the Khan family revealed that the reports were untrue. Later, Fauzia Arshi told the press, "All these tweets and posts are rumours. He is very much alive. I had a word with him late in the evening. I would request all to stop these rumours."

In the same year in October, he was taken to Baba Ramdev's Patanjali Yogpeeth for treatment.

Promoted
Listen to the latest songs, only on JioSaavn.com
Kader Khan is known for his work as an actor and a writer in numerous films in his career spanning almost four decades. He has worked with directors like Manmohan Desai and Prakash Mehra in over 300 films. With Shakti Kapoor, Mr Khan co-starred in hit films like Deewana Mastana, Hero No 1, Saajan Chale Sasural, Khuddar and Aankhen. Many of his films starred actor Govinda in the lead. Kader Khan won the Filmfare Best Comedian Award for Baap Numbri Beta Dus Numbri.