'Kaala' Records Lowest Ever Opening For A Rajinikanth Film: Reports

A trade analyst says that Rajinikanth's Kaala's will have stiff competition from Jurassic World: Fallen Kingdom 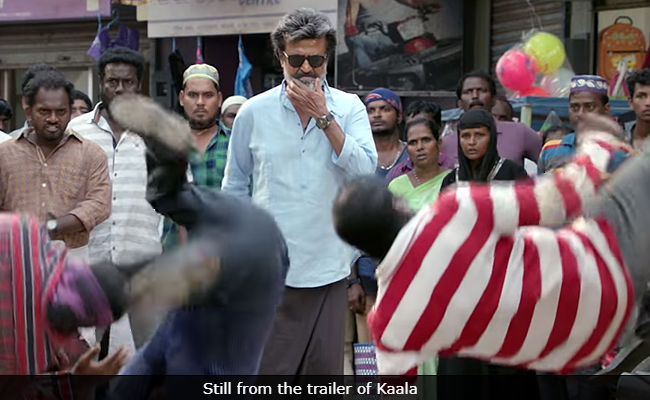 New Delhi: Kaala recorded the lowest ever opening for a Rajinikanth film in recent times, reports news agency IANS. Shocked? As per actor activist Vishal Krishna, the first day numbers of Kaala have been affected by the film's 'ban' in Karnataka and may be even director Pa Ranjith. Vishal Krishna, who is a member of the Tamil Nadu Films Producers' Council (TFPC), explained: "Kaalahas been unnecessarily embroiled in the Cauvery controversy. How much this has affected the film's opening, I don't know. What I do know is that at the end of the day Rajini sir is Rajini sir. Any film of his evokes a massive response. The opening of 'Kaala' may be on the lower side - I haven't found the time to check - because his last film with the same director (Pa Ranjith) had not been appreciated that much."

But Vishal says the box office fate of Kaala, which collected over Rs 200 crore before release, hasn't been sealed yet. "Rajini Sir's fan club is stronger than ever. And I am a member. They will ensure a smooth run for 'Kaala'. Let's not forget, this is the Ramzan week and a sizable chunk of the audience likes to refrain from watching films during this period even if it is Rajini Sir's film. I intend to see 'Kaala' the soonest possible," Vishal told IANS.

Trade analyst Atul Mohan listed other reasons for 'Kaala's' slow start. Atul Mohan said that the meagre collection despite shows stating as early as 4 am, may be due to the 'lean Ramzan period' and the delay in the film's release. "This may be due to some of the factors like couple of postponements in release date, Ramzan period, particularly the week before Eid which is dullest for business, as next Friday the big film of Salman Khan (Race 3) releases."

Atul Mohan also said that the slow start can also be attributed to the poor commercial results of his previous films. "Also his last few films haven't done well. The promos of Kaala haven't established a connect with Hindi audiences. It looks like a Ninetis film. But we hope they have some great story to be shared which may be liked and the film does well," IANS quoted him as saying.

Kaala received a grand welcome from his fans worldwide today. From fireworks to dance and music, fans started celebrating the release of Kaala early morning on June 7.

Promoted
Listen to the latest songs, only on JioSaavn.com
Kaala is produced by Rajinikanth's son-in-law Dhanush and it also stars Nana Patekar and Huma Qureshi.