"You are so funny my child," Neena Gupta commented on her daughter's post 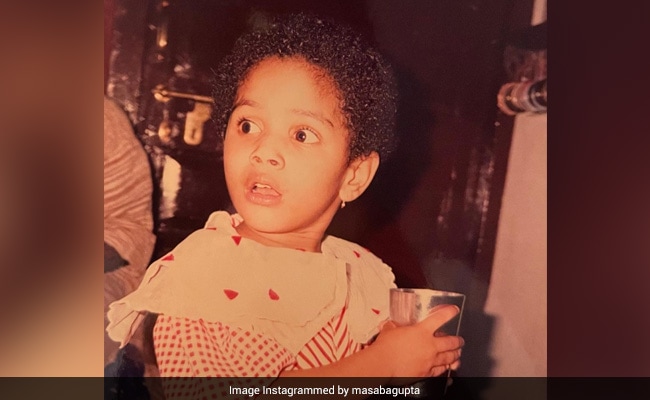 We couldn't even get past all the cuteness in Masaba Gupta's throwback post and she stole our attention with her hilarious caption. On Tuesday, the designer shared an adorable picture of herself from her childhood days. Little Masaba can be seen goofily posing in the candid picture. She hilariously summed up the mood of the photograph with these words: "When you're high on Fanta and have nostrils that are more animated than your eyes." She accompanied the post with the hashtag #justkidthings. In the comments section of her post, Masaba's mom and veteran actress Neena Gupta wrote: "You are so funny my child." Radhika Apte and Tahira Kashyap dropped heart emojis in the comments.

Last month, Masaba Gupta shared a throwback gem, which featured her mom Neena Gupta and West Indies cricket legend Vivian Richards (Masaba's father). Masaba did not reveal when or where the picture was taken but it happens to be from her childhood days. Little Masaba can be seen curled up in her mother Neena Gupta's arms. "My world. My blood," Masaba captioned her post.

Masaba Gupta was last seen in the Netflix smash hit Masaba Masaba, a semi-fictionalised show inspired by the lives of Masaba Gupta and her actress-mother Neena Gupta. It was directed by Sonam Nair and produced by Ashvini Yardi. The second season of the show will release this year. Last year, Masaba also featured as one of the judges on the TV reality show MTV Supermodel Of The Year.