Just A Pic Of Shahid Kapoor Prepping For Jersey. The Internet Loves It 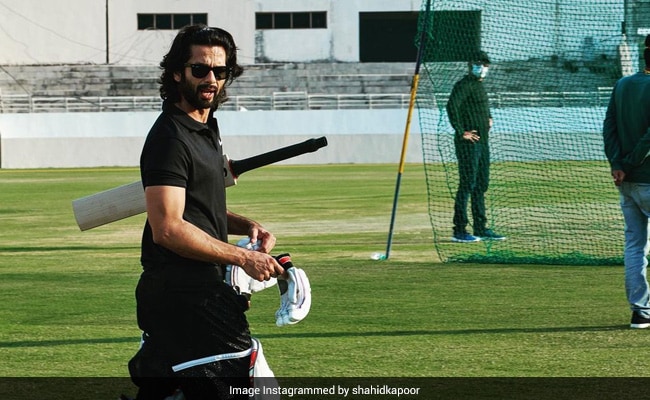 Shahid Kapoor is prepping for his new film Jersey with full dedication and how. The actor, on Saturday, posted a picture of himself from the sets of the film and sent his Instafam into a tizzy. For those who don't know, Shahid Kapoor will play the role of a cricket enthusiast whose dream to join the Indian cricket team is fulfilled when he is in his 40s in Jersey. Sharing a photo of himself from a cricket practicing ground, in which he can be seen holding a bat underneath his shoulder while wearing his gloves, the actor wrote: "#jersey prep...De dhana dhan."

Shahid Kapoor's new look from the film left his fans in awe. They dropped heart and fire icons in the comments section. Check out the aforementioned post here:

Jersey is the Hindi remake of the 2019 Telugu movie of the same name. It will also feature Shahid Kapoor's father Pankaj Kapur as his mentor. The film is directed by Gowtam Tinnanuri, who also made the original Telugu film.

Shahid Kapoor has previously shared several glimpses from the sets of Jersey, in which he could be seen prepping for his role. Take a look:

Early mornings.. wake up with drive.

Can't wait to get back. Missing my boys @rajivmehra1988 n @harshuln #jersey

Jersey, which will also star Mrunal Thakur, was scheduled to release on August 28 release. However, it was shifted due to the coronavirus pandemic. The new release date has not been announced yet.

Shahid Kapoor was last seen in Kabir Singh, which was the second highest earning Hindi film of 2019 after War.Kabir Singh is the Hindi remake of the Telugu film Arjun Reddy.